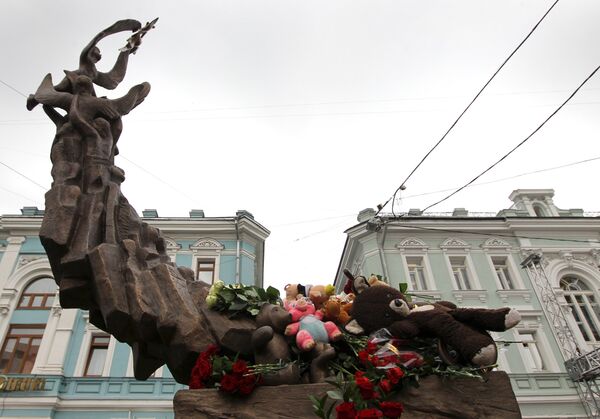 A monument to the victims of the 2004 Beslan school siege was unveiled in Russia's North Caucasus republic of Karachai-Circassia on Friday.

A monument to the victims of the 2004 Beslan school siege was unveiled in Russia's North Caucasus republic of Karachai-Circassia on Friday.

The red granite sculpture was unveiled on the eve of the Day of Solidarity in the Fight Against Terrorism, marked in Russia on September 3 and associated with the end of the three-day deadly siege of Beslan School No. 1, which left 334 hostages dead - more than half of them children - and many others crippled for life.

Funds for the monument's construction were raised by private donations from the republic's residents.

"We remember and mourn all victims of the Beslan terrorist attack. We must join forces and do everything to prevent such tragedies from happening again," the head of Karachai-Circassia, Rashid Temrezov, said.

Chechen militants held over 1,000 hostages in the school gym without food or water beneath bombs strung to basketball hoops. The siege came to an end after an explosion rocked the school and Russian special forces moved in.

Monuments to victims have been erected in Beslan and Vladikavkaz in the Caucasus, St. Petersburg in Russia's northwest and also in downtown Moscow.

The city of Florence in Italy has named a square after the children of Beslan. The Italian municipality of Castelnovo di Sotto and the tiny San Marino also have monuments devoted to the victims of Beslan.