Lukashenko tries to rescue the national currency and himself 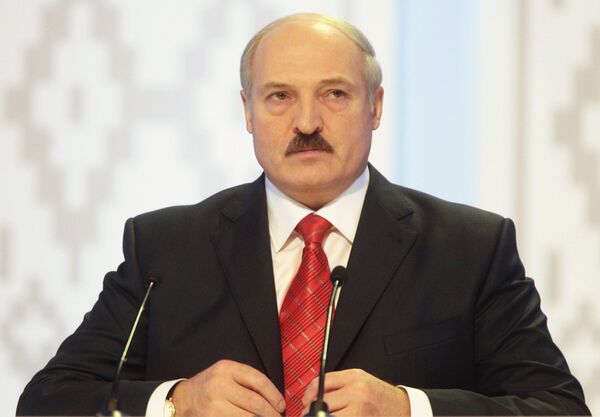 © RIA Novosti . Ilya Pitalev
/
Go to the photo bank
Subscribe
Belarusian President Alexander Lukashenko came to his country's rescue on Tuesday. He sought to protect it from the specter of popular protests by proposing to expand the authority of the CSTO's Collective Rapid Reaction Force. He also announced a liberalization of the Belarusian ruble to stave off the looming financial crisis. Analysts believe that both initiatives have a very modest chance of success.

Belarusian President Alexander Lukashenko came to his country's rescue on Tuesday. He sought to protect it from the specter of popular protests by proposing to expand the authority of the CSTO's Collective Rapid Reaction Force. He also announced a liberalization of the Belarusian ruble to stave off the looming financial crisis. Analysts believe that both initiatives have a very modest chance of success.

Regarding the proposal to broaden the rapid reaction force's mandate, Lukashenko said, "The matter is not only the use of the rapid reaction force in the event of interference from states outside [the CSTO], but also interference from other states within the organization." Lukashenko was speaking at a meeting with CSTO Secretary General Nikolai Bordyuzha in Minsk on Tuesday. "No one will unleash a war on us, but many are itching to stage a constitutional coup," he added.

Bordyuzha told Lukashenko that the next CSTO summit in December will focus on "specific draft resolutions," one of which would amend the organization's charter.

The Belarusian president also has his eyes set on economic reforms. Beginning in mid-September, Belarus will liberalize its national currency's exchange rate and stop artificially propping it up, Lukashenko told his government on Tuesday.

Collective forces for internal use

Speaking of the collective forces, Lukashenko in fact meant Russian military units - the biggest and most capable contingent of the CSTO forces.

However, at present the CSTO members are not equally represented in the collective security force. In fact, the CRRF - which still needs to be developed and trained - mainly consists of Russian paratroopers.

Its core is made up of the 98th Ivanovskaya Airborne Division and the 31st Ulyanovskaya Separate Airborne Assault Brigade, which also trains all Russian peacekeepers. Kazakhstan and Belarus have dispatched a couple of special task brigades each, while other CSTO members are only nominally involved.

Political analysts say Lukashenko's statement has prompted questions about the limits of the CRRF's mandate and the threat that it could be used against a member state.

"The collective force has never been intended for handling internal problems in CSTO countries," said Alexander Sharavin, director of the Institute for Political and Military Analysis. He told RIA Novosti it would be wrong to use the CRRF to suppress popular unrest. "If this were to happen, wouldn't the local population see it as foreign interference in their sovereign affairs?" he asked.

However, there is a risk that the CRRF could be used to intervene in internal conflicts, analysts say. "Essentially, what [Lukashenko] proposed is extending the CSTO force's mandate, which would violate the principle of sovereignty," said Kirill Koktysh of the Association of Political Experts and Consultants. "If we trace international political history since the Peace of Westphalia in 1648, we'll see that multilateral unions, as a rule, sought to avoid this kind of legal controversy," he warned.

Analysts seem rather skeptical about the viability of the Belarusian president's initiatives. "I think Russian leaders will try hard to distance themselves from this, as Russia does not have much to gain while the political costs are high, including accusations of imperial ambitions," Koktysh said. Sharavin dismissed Lukashenko's idea as "having no future."

"The exchange rate of the Belarusian ruble will be determined by supply and demand," Lukashenko said Tuesday.

"The exchange rate determined at the regular trading session will be used to pay for gas, electricity and other urgent needs," he added, explaining that this will restrain price increases. Lukashenko also signed a decree cancelling companies' privileges regarding the compulsory sale of foreign currency. As of today, Belarusian exporters sell 30% of their foreign currency earnings to the government at the national bank rate.

Having ordered a floating exchange rate for the ruble, Lukashenko nevertheless instructed his state control committee to develop a drastic policy against those who would try to sow panic, including in the media.

"The national bank should monitor the situation daily, and intervene whenever necessary to repel attacks by speculators," Lukashenko said.

"God help you [BG1]if you fail to stabilize the financial sphere," he warned the government and bankers.

Analysts believe Lukashenko had no choice but to make the ruble a floating currency.

"This was inevitable. He had no other choice. It was clear the Belarusian government would not be able to keep the ruble at this level for much longer," Yevsei Gurvich, head of Economic Expert Group, told RIA Novosti. The National Bank exchange rate for the Belarusian ruble was set at 5,065 per U.S. dollar for August 30, while on the black market one dollar cost around 9,000 rubles.

The Belarusian ruble's rapid depreciation against the dollar, by 56% in May, was not the end, Troika Dialog's chief economist Anton Struchenevsky told RIA Novosti. "The market has failed to find a balance, and the currency continued falling. Belarus has a multiple currency system today, an official exchange rate, and an unofficial exchange rate, which is miles away from the official one. This hinders economic development," he said.

The decision to liberalize the national currency rate will increase confidence in the ruble. People will know its exchange rate is objective and market-based, and will not expect it to collapse in a week or two, Gurvich said. "This may slow down the outflow of capital from Belarus," he added.

On the other hand, this decision should be followed by more steps to liberalize the economy. "It would be difficult to coordinate a tightly regulated economy and a floating currency," Gurvich said.

The Belarusian economy is very dependent on financial assistance. The country is always looking for more loans. However, it can no longer borrow in the West because Europe has imposed sanctions on the country following the crackdown on anti-presidential protests and arrests of opposition activists.

One of Britain's largest banks, Royal Bank of Scotland (RBS), has recently ceased cooperation with Belarus for the same reason. In January, that bank participated in Belarus's $800 million Eurobond issue.

The only loans Belarus can count on are from the Eurasian Economic Community (EurAsEC) anti-crisis fund. EurAsEC is a regional organization comprised of five CIS members - Belarus, Kazakhstan, Kyrgyzstan, Russia and Tajikistan.

Taking steps to stabilize the country's currency policy was one of the conditions EurAsEC made before it would extend a three-year $3 billion loan to Belarus.

In June, Belarus received the first $800 million tranche of that stabilization loan; the second tranche, $440 million, was also planned for 2011. However, the representative of the Eurasian Development Bank, which manages the EurAsEC anti-crisis fund, said on August 25 that the disbursement of the second tranche could be postponed.

Belarus has failed to fully honor its commitments concerning economic restructuring. According to the EDB representative, it has failed to standardize exchange rates, stabilize reserves, or restore confidence in its national currency.

Analysts are not as confident as Lukashenko that the Belarusian ruble's exchange rate will be determined solely by supply and demand. "Belarusian companies are mostly state-controlled, not privately owned, and exchange rates are bound to be regulated to some extent," said Oksana Osipova, a leading expert from the Development Center of the Higher School of Economics. "To liberalize the Belarusian economy, they would need to change the currency and banking laws."

Along with making the ruble a floating currency, Lukashenko mentioned the possible intervention by the National Bank to "repel attacks by speculators." "The market will be regulated, and nothing can be done about it in the near future unless there are economic and institutional changes," Osipova added. All administrative or other restrictions on the ruble's exchange rate should be rescinded, she said. Struchenevsky also sees the recent move as a "game of populism."

Theoretically, the National Bank could use its gold and foreign currency reserves to resist speculator attacks. "But Belarus does not have big reserves, so there isn't much they can spend. It's wishful thinking," Struchenevsky said.

Analysts believe the value of the Belarusian ruble will continue to decline. "They have unresolved problems such as inflation and an overheated economy. All of that will exert more pressure on the national currency, pushing it further downward," Struchenevsky said.