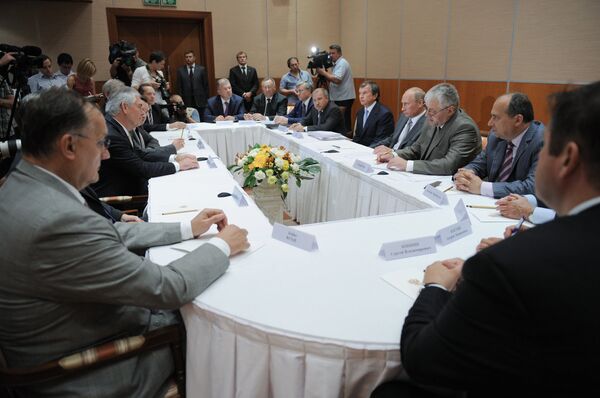 Russian state-controlled oil company Rosneft and U.S. energy giant ExxonMobil signed a strategic cooperation agreement on Tuesday, including Arctic shelf operations, which could be worth around $3.2 billion.

Russian state-controlled oil company Rosneft and U.S. energy giant Exxon Mobil signed a strategic cooperation agreement on Tuesday, including Arctic shelf operations, which could be worth around $3.2 billion.

“This event will be well received by global markets as new horizons will open,” Putin said at a meeting with Exxon Mobil’s top executives, referring to the company’s operations in Russia’s Arctic and on its deepwater shelf.

Russian Deputy Prime Minister Igor Sechin, who also attended the signing, said there would be no equity swap deal, although he did not rule out the possibility in the future.

Under the deal, Rosneft will now be able to operate in Exxon Mobil turf in the United States - in the Gulf of Mexico and Texas, as well as in third countries.

The agreement includes approximately $3.2 billion to be spent funding the exploration of East Prinovozemelskiy Blocks 1, 2 and 3 in the Kara Sea and the Tuapse License Block in the Black Sea. Rosneft will own 66.7 percent and Exxon Mobil 33.3 percent of a joint venture to develop the blocks.

Exxon Mobil said on its website the blocks “are among the most promising and least explored offshore areas globally, with high potential for liquids and gas.”

The companies will create an Arctic Research and Design Center for Offshore Developments in St. Petersburg, which will be staffed by Rosneft and ExxonMobil employees.

Additionally Rosneft and Exxon Mobil will implement a program of staff exchanges of technical and management employees which “will help strengthen the relationships between the companies and provide valuable career development opportunities for personnel of both companies,” ExxonMobil said.

In January, Rosneft and Britain's BP agreed on a $16 billion share swap and Arctic shelf development deal. This was later blocked by a court injunction following legal action by the AAR consortium, which represents BP’s partners in the TNK-BP Russian joint venture.

AAR says the deal broke TNK-BP's 2008 shareholder agreement under which all energy projects had to be offered to TNK-BP first.

AAR then went to the Stockholm tribunal, which froze the deal and ordered BP, which pinned hopes of replenishing its reserves on the Rosneft deal after the Gulf of Mexico disaster, to develop the project together with TNK-BP, but Rosneft said it did not see AAR as a partner.