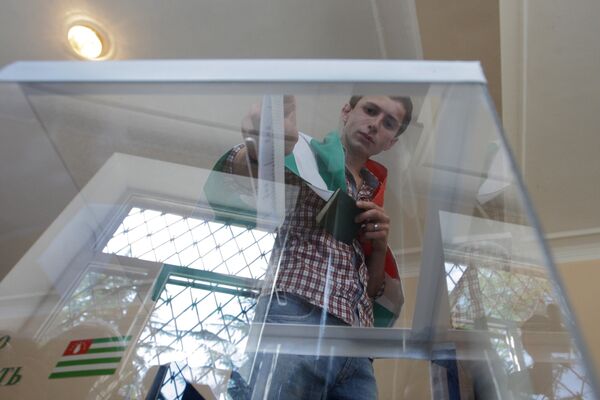 The United States has dismissed recent presidential elections in Georgia's breakaway republic of Abkhazia as illegitimate and reiterated its support for Georgia's territorial integrity and sovereignty.

The United States has dismissed recent presidential elections in Georgia's breakaway republic of Abkhazia as illegitimate and reiterated its support for Georgia's territorial integrity and sovereignty.

Alexander Ankvab, the acting president of Abkhazia, won the presidential election on August 26 taking 54.9 percent of the vote in the first round. The turnout was 72 percent.

"The United States does not recognize the legitimacy or the results of the August 26 so-called elections in the Abkhazia region of Georgia," State Department spokeswoman Victoria Nuland said on Monday.

"We reiterate our support for Georgia's sovereignty, territorial integrity within its internationally-recognized borders," Nuland said.

Abkhazia broke away from Georgia after a brutal civil war in the 1990s.

Abkhazia and another Georgian breakaway republic, South Ossetia, were recognized by Russia as independent states in 2008 following a five-day war, which started when Georgia attacked South Ossetia in an attempt to bring it back under central control.

Georgia, which still considers the two regions part of its sovereign territory, has repeatedly stated that any elections in Abkhazia or South Ossetia would be illegitimate and would never be recognized by the international community.

Only four countries - Nicaragua, Venezuela and the tiny Pacific island nations of Nauru and Vanuatu - have so far followed Russia's lead in recognizing the two former Georgian republics.