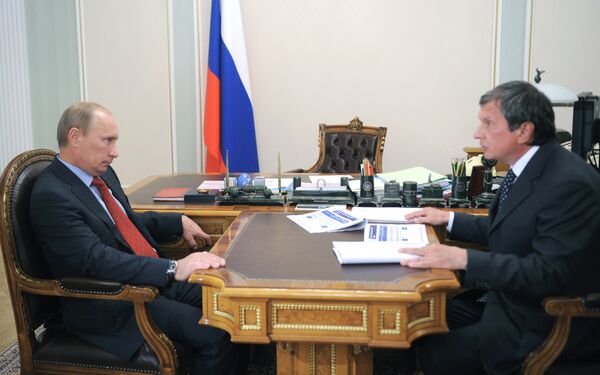 "Everything should be finished by September," Putin told Deputy Prime Minister Igor Sechin.

The premier stepped into an open conflict between manufacturers complaining about delays and the military over "skyrocketing prices." The spat caused serious disruptions in the state order in 2010 and 2011.

Sechin reassured Putin that a special commission had been set up for negotiations between the conflicting sides. He said the military had agreed to revise their position.

"If earlier the price was based on deflators, now we have agreed with the Defense Ministry to use direct calculation," Sechin said.

The situation with defense contracts for 2011 came to spotlight in May after President Dmitry Medvedev openly criticized Defense Ministry officials for stalling the process.

In mid-August Russia's state-owned United Industrial Corporation (Oboronprom), which produces helicopters, aircraft engines and air defense systems, said it would sign contracts worth a total of 620 billion rubles ($21 billion) by the end of 2011 against 192 billion rubles ($6 billion) in 2010.

In combat aviation, hopes were pinned on the annual air show MAKS-2011 near Moscow, but the event failed to produce any serious deals.

When asked about shipbuilding contracts, Sechin said several conferences had taken place this week involving officials from the Defense Ministry, the Industry Ministry, the United Shipbuilding Corporation and the government's defense sector commission.

"Today... three [shipbuilding] contracts will be signed out of the planned 13, and in the next two weeks we will complete work on the other contracts following negotiations on the price," Sechin told Putin.