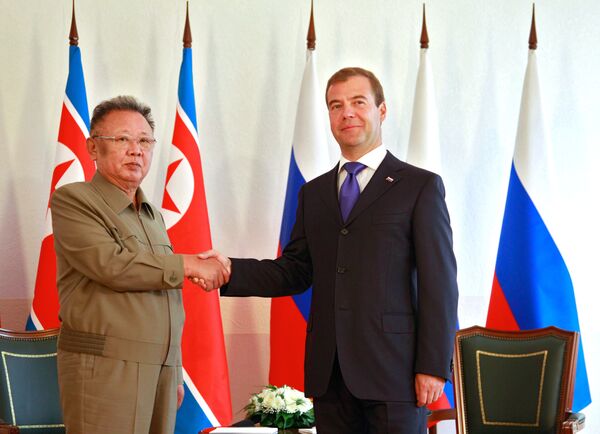 © RIA Novosti . Dmitry Astachov
/
Go to the photo bank
Subscribe
North Korean leader Kim Jong-il agreed on a deal with Russian President Dmitry Medvedev on Wednesday for a gas export pipeline to South Korea and said his country would return to nuclear talks without precondition.

North Korean leader Kim Jong-il agreed on a deal with Russian President Dmitry Medvedev on Wednesday for a gas export pipeline to South Korea and said his country would return to nuclear talks without precondition.

North Korea has been in negotiations with Russian gas giant Gazprom on a pipeline that would be laid through its territory to neighboring South Korea. Reports suggest such a deal could be worth around $100m a year for the North.

“As for gas cooperation, we have results. We’ve ordered our government bodies to establish a special commission…to outline the details of bilateral cooperation on gas transit through the territory of North Korea and the joining of South Korea to the project,” Medvedev said.

The technical work on the pipeline will start soon, Medvedev said, adding that he had told Gazprom CEO Alexei Miller to “pay the issue the closest attention.”

In early August, Russian Foreign Minister Sergei Lavrov held talks on the issue with his North Korean counterpart Kim Son Khvan. Lavrov said then that if talks were successful on a corporate basis, then the project could get trilateral political approval.

In 2009 South Korea’s Kogas and Gazprom signed an agreement on a joint study into the gas delivery project. The construction of the pipeline, however, was stalled because of tensions on the Korean peninsula.

Kim also told Medvedev during the talks that North Korea is ready to resume six-party talks on its nuclear program without preconditions, the Russian president’s spokeswoman, Natalia Timakova, said.

“During the talks, they will be ready to introduce a moratorium on the production of nuclear materials and on [nuclear] tests,” she said.

Kim, who has been on a visit to Russia since the end of last week, met with Medvedev in a hotel in the town of Sosnovy Bor.