Return of the recluse: North Korean leader in Russia for talks 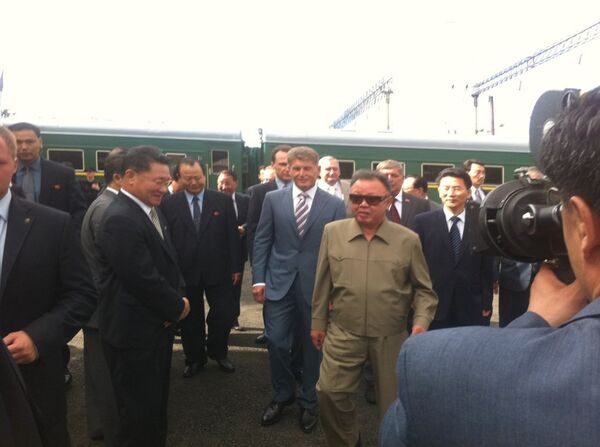 © Photo : Port Amur
Subscribe
Kim Jong-il's train is currently travelling across Russia, and this is bound to pique the interest of those who remember just how rarely the reclusive North Korean leader travels abroad. This once-in-a-blue-moon visit is unlikely to herald any landmark agreements or breakthroughs, though.

Kim Jong-il's train is currently travelling across Russia, and this is bound to pique the interest of those who remember just how rarely the reclusive North Korean leader travels abroad. This once-in-a-blue-moon visit is unlikely to herald any landmark agreements or breakthroughs, though.

The agenda of Kim's forthcoming talks with Russian President Dmitry Medvedev has been in the making for a few weeks now. The two leaders will focus on pipelines and transportation links, but they are unlikely to touch on North Korea's nuclear program, which is better discussed during multilateral talks.

Progress in North Korea's rapprochement with the international community stalled in 2002 when Washington accused Pyongyang of pursuing a covert nuclear weapons program in violation of agreements made with the U.S. No conclusive evidence was offered to corroborate those allegations. But there is no need for any proof now - in response to international demands to halt its nuclear research, the North Korean government has brought its program into the open, and it now makes no bones about having made several nuclear warheads.

But let us recall what North Korea was like in 2002. That year, the country's authorities attempted economic reforms along the lines of what the Chinese and Vietnamese did. They began to seriously examine the possibility of reuniting with the South, which has been in discussion since the '50s.

The two Koreas began by linking their separate railways across the border in the demilitarized zone. Russia was a third party in this effort as the project involved connecting the Trans-Korean railroad to the Trans-Siberian.

Agreed in principle back in 2001, when Kim Jong-il arrived in Moscow to meet with then-Russian president Vladimir Putin, the project promised a lot of transit benefits to every party and could have become a logistical axis of North Korea's internationally encouraged development as well as of Russian-North Korean economic cooperation, which is still limited largely to Russia's Far East.

Kim and Putin met again a year later, in 2002. Their talks in Vladivostok focused on railroads. It became clear that the North Korean regime, similar in many respects to the Stalinist dictatorship, was now on the verge of transforming itself, with assistance from its three neighbors, Russia, China and South Korea. But that process was suddenly upended by the nuclear scandal. Now, nine years on, there are signs that Pyongyang is returning to that point.

A pipeline and a railroad side-by-side

One of the very few recent developments since the suspension of North Korea's economic reform has been Gazprom's trans-Korean gas pipeline project. According to foreign experts, its estimated capacity is 10 billion cubic meters over a period of thirty years.

The Russian energy giant needs this pipeline primarily for exporting gas to South Korea. But the North also stands to benefit. The project is part of Russia's policy of gas export diversification, which involves not only increasing the share of shipments to the east, but also winning over more customers across Asia.

Some may argue that Russia's gas negotiations with China have been slow going. But this is not the region's only gas consumer, after all.

A pipeline from Russia to the south of the Korean peninsula must pass through North Korea. Which is why Moscow has already spent several months discussing all related issues both with Seoul and Pyongyang, including the possibility of building the pipeline alongside a new railroad.

In late June, rumors suddenly emerged about Kim's arrival in Vladivostok, but they have never materialized. High-ranking Russian diplomats then noted in their remarks that an invitation for the North Korean leader to visit had been issued a long time ago and that now only a time and a place had to be determined.

As for the venue, knowledgeable South Korean sources say the meeting between Kim and Medvedev will take place in Ulan Ude on Tuesday.

Russian media have made no announcement so far. But according to President Medvedev's website, Kim's trip will be limited to Russia's Far East and Siberia.

Economics in the service of politics

What other issues are likely to come up at the forthcoming Kim-Medvedev talks? Perhaps the two leaders will discuss economic cooperation as a way to improve the region's security situation, on which the deadlock has now finally been broken. Security improvements, for their part, could help speed up international negotiations on North Korea's nuclear program.

Surely, Pyongyang had its reasons to suspect former U.S. President George W. Bush - the first person to accuse the North Korean leadership of nuclear ambitions - of seeking to overthrow the country's regime (as well as those of Iran and Iraq).

Bush called the three countries "rogue states" forming an "axis of evil." He then launched a military campaign in Iraq, thereby increasing Pyongyang's distrust of the U.S. administration.

Yet, the fact that nuclear talks assumed a six-party format shortly thereafter, with several world powers coming on board to mediate between Washington and Pyongyang, should have reassured the North Korean leadership that the U.S. had no plans to use military force against their country.

Russia plays a significant mediatory role in those talks. The improved Russian-U.S. relationship should provide the North Koreans with even more reason to believe that the purpose of the talks is to engage them in broad regional cooperation in the interest of addressing security problems in the region.