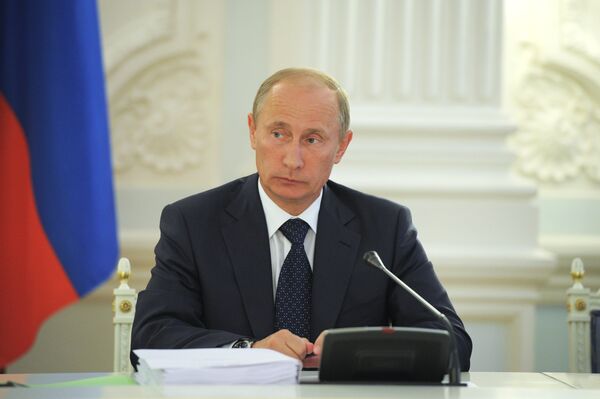 Prime Minister Vladimir Putin used a routine meeting of the Council of Ministers of the Union State of Russia and Belarus (USRB) to make a statement on a major issue of bilateral relations - the price of gas for Belarusian consumers.

Prime Minister Vladimir Putin used a routine meeting of the Council of Ministers of the Union State of Russia and Belarus (USRB) to make a statement on a major issue of bilateral relations - the price of gas for Belarusian consumers.

"Russia has taken a decision to introduce an integrative decrease adjustment into the gas pricing formula for Belarus from 2012," Putin said, albeit without taking any concrete financial commitments. He said that the exact value of the adjustment factor, so coveted by Belarus, will have to be set during talks between the countries' economic agents.

The prime minister also bluntly mentioned the price Russia intends to demand for this gas price discount: "We hope this process will be accompanied by Gazprom's acquisition of the remaining 50 percent of the Belarusian Beltransgaz gas transportation company."

The gas issue has poisoned bilateral relations since the mid-2000s when Russia had to cut off gas supplies to its official ally from time to time. The aim was the same - to compel Belarusian President Alexander Lukashenko to accept new gas prices, as they were regularly increased at the start of a new year after a relevant warning. The warning was always made several months before the gas price was changed.

Lukashenko never replied to these warnings and always kicked up a row on the eve of the price rises, calling them "a stab in the back." His indignation was especially strong in 2010 when the Customs Union of Russia, Belarus and Kazakhstan came into effect. He said the existence of different energy prices within the USRB was a violation of the Customs Union's Charter and of the rules of fair competition.

"What can we talk about if, say, the Minsk Tractor Plant would pay $250 or $200 for gas whereas a tractor plant in Volgograd would use it for $30?" he said angrily in 2006. "What competition and equal opportunities are we talking about? Let the price be $500, but let it be $500 in the entire economic space because we must have equal conditions."

Indicatively, Putin, who earlier cold-bloodedly ignored Lukashenko's references to the joint customs territory, this time around repeated his idea about equal starting opportunities for the two countries' economies.

"We proceed from the premise that we must create conditions of equal competition in our integration groupings," Putin said after meeting Lukashenko.

Apparently, the logic is as follows - if Beltransgaz indeed becomes Gazprom's property, it is necessary to ensure that Russia's rights to this property are respected. This would only be possible if Russia honors its Customs Union commitments.

Lukashenko can no longer afford to keep the gas network

"Until now, Lukashenko's tactics boiled down to speaking loudly about 'extortionate' new gas prices," Lidia Kosikova, a leading fellow of the Russian Academy of Sciences' Institute of Economics explained. "However, each time he thoroughly prepared for the new price rise, aware that it was inevitable. He kept clinging strongly to his gas network, viewing it as a guarantee of his sovereignty."

But this time, he can no longer afford the "I-will-sell-everything-but-the-pipes" approach. The Belarusian economy is unable to ignite after the recent devaluation. The Belarusian ruble rate on the free market keeps falling. Experts explain this is due to the increase in money supply. The amount of cash in circulation has increased by 57.1 percent since early this year, and July saw a record growth of 11.4 percent. Many strata of the population have seen their real incomes dwindling. Prime Minister Mikhail Myasnikovich put an official end to the domestic "construction boom," offering to concentrate more on the quality of building and to drastically reduce the number of projects in 2011-2012.

It is probably due to these circumstances that Russia's leaders have recalled the all but forgotten "gas-for-the-gas-network" formula. After several crises in 2004-2008, Gazprom acquired half of the shares in Beltransgaz. Now the question concerns the remaining half. In July, Gazprom announced its intention to sign new contracts as "the full owner of Beltransgaz."

The uphill road of integration

So, Gazprom is buying Beltransgaz. But is Lukashenko a reliable seller? The beleaguered Yamal-Europe gas pipeline, which carries about 30 billion cubic meters of gas per year through Belarus and Poland, has become the victim of political intrigue more than once. When Polish-Russian relations deteriorated in the early 2000s, Polish farmers suddenly started complaining about the pipeline passing through their plots.

Obviously, Lukashenko is a much more stubborn opponent than any farmer. Knowing his style, we should not be surprised if numerous environmental grievances are raised in the near future against Beltransgaz, which has instantly become "foreign." New owners with unaccounted interests may also appear as a bolt from the blue.

However, today's statements by Gazprom CEO Alexei Miller on a related issue suggest that the Russian leaders have taken a well-thought-out decision by returning to the gas integration project.

After taking part in a meeting between President Dmitry Medvedev and Ukrainian Energy Minister Yury Boiko, Miller said Russia and Ukraine could follow the same pattern in their gas cooperation as with Belarus. This statement suggests indirectly that the Russian government still prefers the uphill road of Russian-Belarusian integration to the protracted confrontation with Ukraine.

A bad peace is better than a good war.