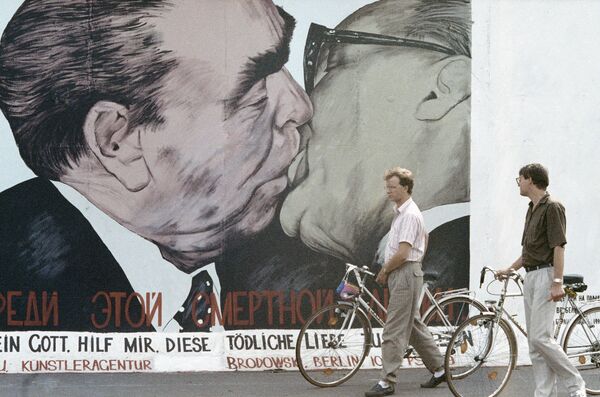 © RIA Novosti . Boris Babanov
/
Go to the photo bank
Subscribe
The Berlin Wall turned 50 on Aug. 13. In the 20th century, it had become a symbol of the confrontation between the contrasting Soviet and Western political systems.

The Berlin Wall turned 50 on Aug. 13. In the 20th century, it had become a symbol of the confrontation between the contrasting Soviet and Western political systems.

World War II united Europe, the Soviet Union and the United States in the struggle against the Third Reich. However, having scored a victory, the allies once again found themselves on the opposite sides of the barricades. In March 1946, ex-British Prime Minister Winston Churchill said: "From Stettin in the Baltic to Trieste in the Adriatic an Iron Curtain has descended across the continent."

This speech laid the foundations for a long-standing confrontation between these two political systems.

Germany became the first battlefield of the Cold War. It was divided into the Federal Republic of Germany (FRG) and the German Democratic Republic (GDR). West Berlin, an enclave with a special political status on GDR territory, became the focus of the confrontation. It appeared on the territory of the American, French and British sectors of the occupation of the German capital in 1949 and existed till 1990.

West Berlin was not part of West Germany but the Deutschmark was valid there. There was no army conscription, and Soviet socialism was not imposed there. This part of the city offered more attractive jobs for the residents of East Berlin and soon there began an exodus to West Germany via West Berlin. From 1949 to 1961 2.7 million people left East Germany. By that time, the Western allies had flooded West Berlin with troops and secret services.

One of the most famous secret operations - by the CIA and MI6 - was the digging of a tunnel from West Berlin to East Berlin in the early 1950s. The aim was to access telephone communications between Soviet troops in Germany. The tunnel was discovered in April 1956 but several years later Western secret services admitted that it ceased to be a secret long before it was officially discovered.

A diplomatic bone of contention

In 1957, the West German government introduced the Hallstein Doctrine according to which the Federal Republic would not establish or maintain diplomatic relations with any state that recognized East Germany. The only exception was made for the Soviet Union. In response, the GDR announced in 1958 that it regarded West Berlin to be part of its territory. Soviet leader Nikita Khrushchev supported this statement, although he proposed to the United States, Britain and France to turn the enclave into a kind of free, demilitarized city. The West replied with a resolute "no."

What could the Soviet Union do under the circumstances? A blockade was no solution. The Soviet Union tried to impose one under Stalin. In 1948-1949, it blocked the Western allies from all railways, rivers and highways leading to the city and cut energy supplies. They replied by organizing an effective air bridge - U.S. and British aviation supplied West Berlin with more than 2 million tons of goods.

By summer 1961, the situation was like a submarine with an open ventilation pane. About 1,000 people, mostly young, fled to West Berlin every day.

It was important to find an effective method to stop the exodus of the people from socialism to capitalism. In theory, economic measures easing the regime in the GDR could help, but they were unacceptable for Khrushchev, not to mention East German leader Walter Ulbricht, a convinced Stalinist whose social policy led the country to an uprising in 1953 that was suppressed by Soviet troops.

So, the ventilation pane had to be shut down mechanically. On Aug. 13, 1961, a concrete wall began to be erected in Berlin against the Potsdam agreements that provided for free movement around the city. The wall graphically expressed the idea of the Iron Curtain.

The wall divided West Berlin from East Berlin, having cut not only the metro lines and streets but also human destinies. The residents of East Berlin who gathered at the checkpoint in the morning of August 14 in the hopes of returning home or going to work or school were dispersed by water jets.

On Oct. 28, the Americans tried to destroy the frontier barriers by pulling their bulldozers and tanks up to Checkpoint Charlie, but the Soviet troops had already been waiting for them. Having let reconnaissance jeeps pass by, they blocked the U.S. hardware. For one day and one night, Soviet and American tanks aimed their guns at one another on the Friedrichstrasse. Luckily, politicians from both sides were smart enough not to turn the Cold War into World War III.

The fall of the Berlin Wall in November 1989 became a symbol of the end of the Cold War. During the wall's existence, more than 100 people lost their lives while attempting to flee to West Berlin. Chris Gueffroy was the last person to be shot while trying to escape to West Berlin on February 6, 1989.