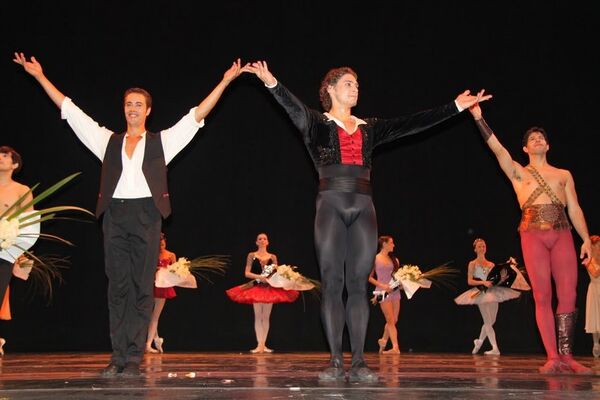 Leading ballet dancers of the Russian Bolshoi Theater performed to a full house in Buenos Aires, Argentina, on Thursday and Friday.

Natalia Osipova and Ivan Vasiliev danced in two international gala concerts at Coliseo, a top theater of Buenos Aires. Despite the fairly high price of $50-200,

tickets were sold out a week before the show.

The ballet dancers were greeted with a storm of applause and then surrounded by autograph seekers.

"Vasiliev has a fantastically high jump that lingers in the air. And Osipova combines splendid technique with amazing grace and lightness," said spectator Martin Rodriguez.

The Argentine press said "the Osipova-Vasiliev couple came from heavens."

They performed an extract from Le Corsaire by Riccardo Drigo (choreographer Marius Petipa).

"All the dancers who performed here in these [two] days are virtuosos of the highest quality and dancing on the same stage with them is enormous pleasure," said Ivan Vasiliev.

The gala concerts were held in Argentina for the first time in 20 years and became breakthrough cultural events for the country. Producer Martin Boschet said similar shows would be organized in other cities across the country next year.