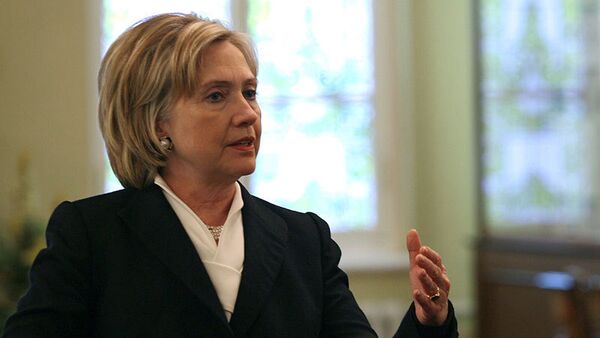 © RIA Novosti
Subscribe
U.S. Secretary of State Hillary Clinton has urged Russia to stop supplying arms to Syria. "We want to see Russia cease selling arms to the Assad regime," she said in a recent interview with the television network CBS.

U.S. Secretary of State Hillary Clinton has urged Russia to stop supplying arms to Syria. "We want to see Russia cease selling arms to the Assad regime," she said in a recent interview with the television network CBS.

The export of Russian weapons to Iran and Libya has already been suspended, and now officials in Washington are raising the issue of Russia's arms sales to Syria.

This is an extremely sensitive issue, even for such an inherently sensitive sector as military and technical cooperation. The business interests of Russian arms manufacturers and the Russian leadership's complex Middle East policy run up against the hard line of Israel and the United States.

In recent years, Russian-Syrian military ties have often come under the barrage of criticism from Tel Aviv and Washington. Moscow has terminated some bilateral contracts in response, so as to avoid further tensions.

One example is the contract for the Iskander E tactical missile system, which was cancelled in 2005.

Sensational reports reemerge every now and then about Russia allegedly supplying Syria with modern jets (fighter jets of the Su-30 family or missile defense interceptors MiG-31E) as well as with S-300PMU-2 Favorit surface-to-air missile systems.

Three Russian-Syrian arms supply contracts have been officially confirmed so far, worth a total $2.5 billion, according to the Center for Analysis of Strategies and Technologies. Under those deals, Russia has committed itself to furnishing 24 new fighters MiG-29M/M2 and Buk-M2E air defense missile launchers, as well as to upgrading Syria's 1,000 T-27M tanks to the T-72M1M model.

There are other Russian-Syrian contracts out there, too. One is for the supply of a Bastion coastal defense missile system. This deal has been a source of controversy since 2007. The Bastion is a modern weapon system equipped with supersonic Yakhont anti-ship missiles. Its non-export version, known as Onix, will soon become the basis for the anti-vessel armaments of the Russian Navy's surface ships and nuclear submarines.

Caught in this embarrassing position, Russia's military leaders alternate between denying that the Bastion deal really exists and hinting that it will be executed against all odds. Their reaction is understandable: arms dealers are averse to publicity and the sector is overly politicized already.

Russia has joined the arms sanctions against Iran and Libya, suspending all contracts for the supply of military hardware to these two countries.

The loss of the contracts with Libya did not look too heavy in light of the political maneuvering of Muammar Gaddafi, who had pledged a lot to Moscow while at the same time trying to secure as many privileges from European arms companies as possible.

And the termination of Iranian contracts, whatever its reasons, has dealt a painful blow to the export revenues of Russian arms manufacturers, notably the companies specializing in air defense systems.

According to some estimates, the contract for the supply of five S-300PMU batteries could exceed $800 million, with compensation payments estimated at $400 million.

Military cooperation with Syria was an issue for U.S.-Russia relations even in the Soviet era. And after the collapse of the Soviet Union, Syria's demand for weaponry by far exceeded Russia's supply capacity.

The current unrest in Syria has brought with it new contradictions, making the situation with arms supplies still harder to disentangle. Russia may now find itself in a situation close to what in chess is know as Zugzwang, when any next move complicates a player's position even further.

By agreeing with the recommendation of the White House, Russia may lose some cash as well as market share in hi-tech defense exports. And if it refuses to cooperate, Russia may complicate its already complicated agenda with the U.S. and NATO on issues related to missile defense and nuclear armaments. It could undermine the hard-won "reset" policy and strengthen the hawkish wing of the Republican Party ahead of the 2012 elections in the United States.