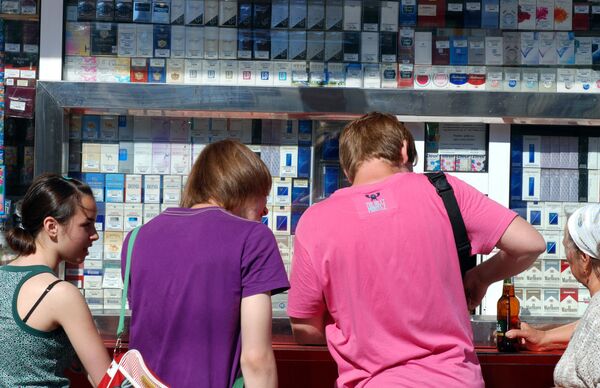 The Russian Health Ministry is promoting a harsh anti-tobacco draft, stipulating a ban on smoking in public transportation, cafes and night clubs, the organization's press service said on Friday.

"It is expected that starting in 2014, smoking in public transportation - long-distance trains, passenger vessels and in the public zones of airports and railway stations - would be completely prohibited," the Health Ministry announced. By 2015, smokers would be expelled from cafes, hotels and night clubs.

The rights of non-smokers kept in pretrial detention facilities would be defended by law. The draft also stipulates that prices on tobacco would be drastically ratcheted up as well as taxes on the tobacco business. A wider information campaign telling people about the harm tobacco inflicts upon the human body is planned.

The initiative lies within the framework of an overall project aimed to curtail consumption of alcohol and cigarettes in the country within the next few years, about which Yevgeny Fedorov, Chairman of the State Duma Committee on Economic Policy and Entrepreneurship, spoke earlier in the day.

According to the Global Adult Tobacco Survey (GATS) 43.9 million adults smoke in Russia, this is about 40 percent of the whole nation. More then half (60.2 percent) of Russian men are smokers. The average Russian smoker has 17 cigarettes a day. As a result, about 400,000 Russians die annually from tobacco-related diseases.

Russia's ruling party United Russia and Prime Minister Vladimir Putin's public organization People's Front have already come up with a proposal to extend the legal drinking and smoking age to 21.