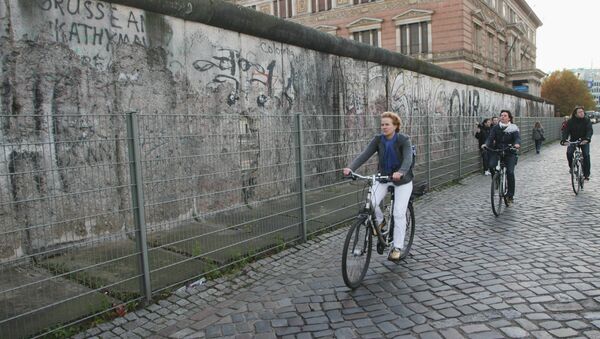 © RIA Novosti . Igor Zarembo
/
Go to the photo bank
Subscribe
Brigitte Heinrich, a history and sports teacher in one of East Berlin's suburbs, witnessed construction of the Berlin wall begin fifty years ago on August 13, 1961.

Brigitte Heinrich, a history and sports teacher in one of East Berlin's suburbs, witnessed construction of the Berlin wall begin fifty years ago on August 13, 1961.

Half a century later, in her head, the wall still stands. She still doesn't communicate with what she calls "Western" Germans.

"They aren't much interested in what is happening in their Eastern compatriots` lives," she said.

The concrete wall on the border between Eastern and Western Berlin lasted from 1961 to 1989.

"There are a lot of sociable Western Germans. Once I spoke to a delegation whose members were asking a lot of questions, they were really interested. However there are a lot of other people who don't want to have any contact with us at all. They haven't been here since Perestroika started," Heinrich said.

Heinrich was born and grew up in Klein-Glienicke on the outskirts of Berlin.

This place was Eastern Berlin's exclave on the territory of the Western part of the city in the Cold War. The area was closed off by the wall along its perimeter, beyond which lay West Berlin.

Entry was possible only via gates in the Berlin Wall or via the Glienicke Bridge, the scene of the many famous spy-swaps between East and West.

"Construction of the wall really started back in 1949 when the GDR was established. The border line was drawn already at this time. We shouldn't have crossed the demarcation line but actually we could reach West Berlin from any point. Then the barbed wire was stretched out in 1961," Heinrich said.

"The inhabitants of the city couldn't believe it would be divided, and hoped for the Allies' support," Brigitte said.

"We lived right near the lake, my father and I had often visited relatives who lived on Pheasant Island. It was forbidden to keep a boat when the wall was built. Our arbor near the lake and clothes lines were moved away, our storehouse was demolished which was terrible for one who had been living here for 20 years," Heinrich recalls.

Visitors could only enter Klein-Glienicke with special ID or local registration. Guests had to leave by midnight.

"Once we had acquaintances visit who had special passes. Two frontier guards came at midnight because our guests didn't leave on time," Heinrich said.

Heinrich had to go a long way around to reach the center of the city where she studied.

"I came home late in the evening and woke up very early. I never got to the university on time," Heinrich said with a smile.

The wall was not entirely successful in keeping the inhabitants of Klein-Glienicke inside. A tunnel was dug in a house in the area and one of Heinrich`s students crossed the border by simply leaning a ladder against the wall.