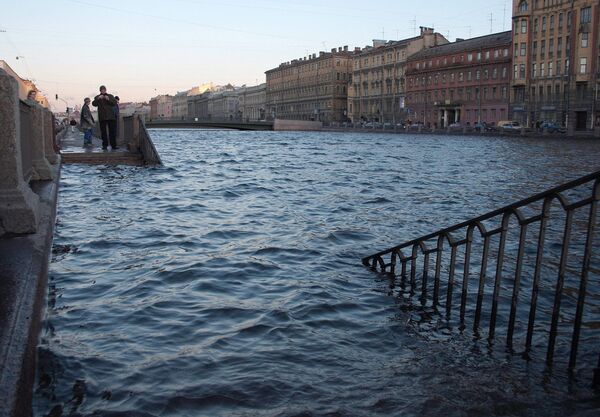 The 25-km complex, officially named Saint Petersburg Flood Prevention Facility Complex, consists of 11 dams built of stone and earth in the Gulf of Finland. It has two large openings for shipping, and six water gates to be closed when needed. The dam is designed to protect the city infrastructure from a five-meter surge in the water level.

Around 30 water purifying systems were installed around the dam to prevent polluted waters from getting into the Gulf of Finland.

The Russian premier said the dam's opening was "a historic event" in Russia.

"As a result, the city is not just protected from floods, the ecological situation also improved," Putin said.

Floods, which have long been a problem in St. Petersburg, have become more frequent in the past years. Almost 25% of all floods in the city's 300-year history were recorded in the last 15 years. Waters of the Neva River rise about 100 times a year, and the city's territory may be flooded up to ten times a year, each time inflicting damage of up to 50 billion rubles ($1.7 billion).

The dam also completes the city's ring road and is expected to solve St. Petersburg's traffic problems. It links the northern and southern parts of the city, the island of Kotlin and the city of Kronstadt.

The project was launched in 1979, but stalled over poor financing in 1995 with almost 70% of all the work completed.