A Russian drone with a complicated history 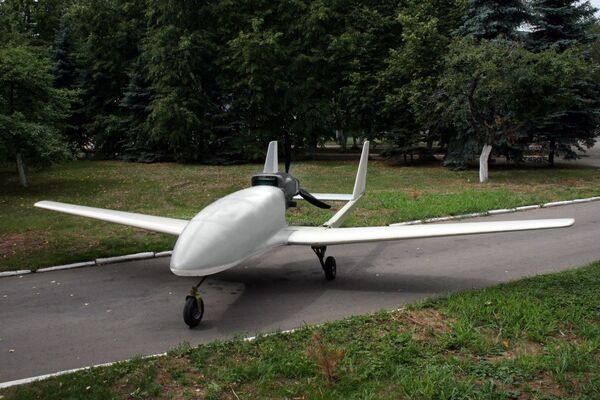 © Photo : Provided be the drone developer "Vega"
Subscribe
Russia's leading drone developer, Vega, will unveil its latest model at the MAKS-2011 air show. Company spokesman Alexei Nedelin said that the new drone, named Luch after the design bureau that developed the bulk of the technology, can be armed with up to 170 kg of weapons systems along with control systems.

Russia's leading drone developer, Vega, will unveil its latest model at the MAKS-2011 air show. Company spokesman Alexei Nedelin said that the new drone, named Luch after the design bureau that developed the bulk of the technology, can be armed with up to 170 kg of weapons systems along with control systems. The Luch represents one of the first attempts to create a Russian-made next-generation attack drone.

The ambitious project's profile is raised through the official status that Vega has - it is a state-owned corporation responsible for a number of projects in the fields of electronics, radar systems, and data collection and management. The company first announced that work on the project was underway back in September last year.

But is it really Russian?

Of specific interest is the drone's configuration. Its developers say that the drone's heart is none other than a Rotax 914 engine. This should raise some eyebrows.

The Rotax 914 was developed by the Austrian company Rotax, a well-known manufacturer of engines used in many unmanned aerial vehicles. Famous drones like the U.S. MQ-1 Predator or the Israeli Heron use Rotax equipment. This is the de-facto standard for drones of this class.

In fact, the Luch is not the first conventional Russian-made attack drone equipped with this exceptionally successful engine. At the previous MAKS show in 2009, Transas Group displayed the Dozor-600, which can properly be described as an attempt to recreate the American Predator, albeit slightly scaled down.

It would be interesting to see what Vega does next with the Luch. If Vega offers it to the Russian Air Force in this form, it will immediately run into problems obtaining components. Export controls are strangling the defense industry and have been unforgiving for much smaller transgressions - imported composites, Taiwanese electronics, even special alloys from CIS countries. Now we're talking about a piece of equipment as complex and important as an engine and, what's more, one that is still widely used in NATO forces.

Besides a sound heart, a good drone needs sharp eyes and ears. Optical tracking systems (in particular, thermal imaging cameras) are a weak spot in the Russian defense industry. True, Russia has made great strides in recent years, but alas, Russian equipment still falls short of the world's best in terms of all operating parameters. The previous generation of domestic unmanned aerial vehicles (manufactured by the very same Vega) did not even fully resolve the problem of camera image stabilization, as revealed in an open meeting with General Vladimir Shamanov in 2009.

It remains unclear what equipment Vega will use in the Luch (the upcoming air show will probably clarify this issue), but Vega's colleagues from Transas installed the Euroflir 350 optronic observation system, made by French company Sagem, in their Dozor-600. In recent years, the French have generally been filling Russia's infrared technology gap. It is unlikely that the Russian Ministry of Defense will be pleased with this incursion into a sensitive area; after all, drones are one of the cornerstones of modern intelligence and control systems on the battlefield.

The drone industry in Russia is scraping along. After accusing developers of wasting public funds and pointedly purchasing Israeli drones for military trials, the Defense Ministry was able to squeeze a few more or less decent small reconnaissance models out of domestic developers. It is quietly using these to arm ground forces.

Developers say that Defense Ministry officials themselves did not know what they wanted. They foolishly bought Israeli drones that don't work properly at 20 degrees below zero, and only then did they listen to the voice of reason and come up with reasonable technical guidelines for developers to follow.

The one bright spot in this sad story is the fact that developers and clients have had their first chance to size each other up. Better not to mention how much effort and money was wasted to get to this point.

Now comes the second stage - raising the equipment class to medium and then to heavy, and supplying the drones with new types of weapons and intelligence systems. This will finally provide the Russian Air Force with the kind of power that American pilots have enjoyed for over ten years.