Britain may use army to crack down on future riots 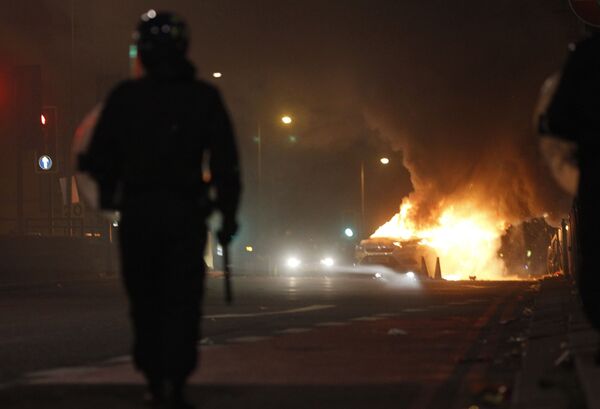 The British government could consider using the army to deal with future riots and may allow police to block social networks and force people to take off masks, the prime minister said on Thursday.

David Cameron was speaking in the wake of riots and looting that hit several British cities and left 111 police injured on August 6-10, Scotland Yard said.

"It is the government's responsibility to make sure that every future contingency is looked at, including whether there are tasks that the army could undertake that might free up more police for the front line," Cameron told an emergency parliamentary session.

The unrest was organized by young people using telecom gadgets and social networks such as Facebook and Twitter. Many rioters wore hoods and balaclavas.

Cameron said police could be given powers to demand people remove face coverings, and that the government will compensate people whose houses or businesses were damaged in the riots.

Cameron also said police might be allowed to interfere with Internet networks and other telecommunication devices if any suspicions arise.

“And when people are using social media for violence we need to stop them. So we are working with the police, the intelligence services and industry to look at whether it would be right to stop people communicating via these websites and services when we know they are plotting violence, disorder and criminality,” he said.

Over 1,300 people have been arrested since the unrest began on Saturday.

The prime minister said the police force would be maintained at 16,000 officers on London streets through the weekend.

Cameron said on Wednesday every action would be taken to restore order, with contingency plans for water cannon to be available at 24 hours' notice.

London police have refrained from using any riot control weapons or firearms against rioters in the past four days. However, an emergency COBRA meeting resolved that harsher measures are needed to curb the rioting.

Violence began in the British capital's northern district of Tottenham on Saturday over the fatal shooting of a young man by police. On Sunday and Monday, it spread to other areas in London and Birmingham.

Cameron denied, however, that the unrest was linked to the death of Duggan, saying it was “used by opportunistic thugs in gangs, first in Tottenham itself then across London and then in other cities.”

"Responsibility for crime always lies with criminals. These people were all volunteers. They didn't have to do what they did and must suffer the consequence,” Cameron said.