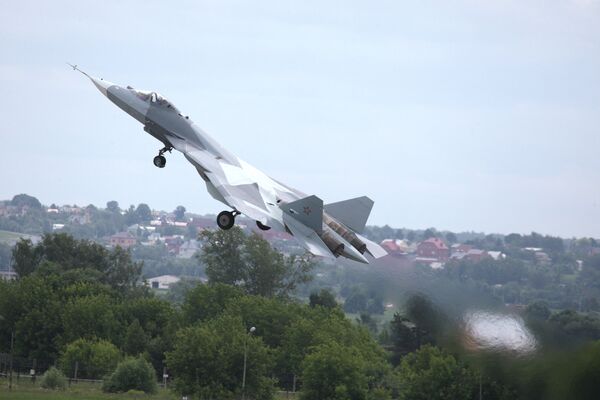 For the first time in over twenty years, an entirely new Russian fighter aircraft will take to the skies in front of the public at the MAKS-2011 air show, where the Sukhoi T-50 prototype combat aircraft is expected to be shown.

For the first time in over twenty years, an entirely new Russian fighter aircraft will take to the skies in front of the public at the MAKS-2011 air show, where the Sukhoi T-50 prototype combat aircraft is expected to be shown.

The fact that Russia will showcase its fifth-generation fighter for the first time is a testament to the survival of a meaningful military aerospace industry, after two decades of huge spending cuts. Russian aerospace has had to survive on what it could earn overseas, primarily in the burgeoning Asian market, particularly China and India.

The T-50, the jewel in the Russian military aerospace crown, also involves India, which will produce a derivative for its own air force.

Russia sold over 450 Su-27/30 and up to 180 MiG-29 fighter jets from 1999 to 2010, according to the Center for Analysis of Strategies and Technologies (CAST), a Moscow-based think-tank, helping warplane makers Sukhoi and MiG to stay afloat despite the lack of domestic orders.

“I am certain that our main manufacturers of combat aircraft [Sukhoi, MiG and Irkut] have sufficient production potential to fulfil both domestic and foreign orders in the future,” says CAST’s director Ruslan Pukhov.

Having survived the lean years of the 1990’s as a disparate collection of design bureaus and manufacturing plants, almost all the main design and production elements of the Russian aircraft industry are now incorporated in the United Aircraft Corporation, a holding company.

UAC has benefited from massive state subsidies and rescheduling of its debts, and new orders.

Now, significant orders are once again coming from the Defense Ministry in Moscow. The Russian Air Force is forging ahead with a major re-equipment program after surviving for two decades with its existing fleet and almost no new aircraft.

The ultimate goal of the Russian military aircraft industry for the next decade is to ensure that 70 percent of the Russian Air Force consists of new and modernized planes by 2020, while successfully competing on global aircraft markets.The success of this ambitious program largely depends on efficient distribution of government funds and streamlining of production to ensure a quick transition from prototype development to full scale manufacturing.

“Any threat to the required funding would impede implementation, while it remains to be seen how quickly - and how well - industry will be able to shift from prototype and pre-production aircraft to full scale production-standard manufacturing,” says Douglas Barrie, a military aerospace expert at the London-based International Institute for Strategic Studies.

Delivery of combat and military transport helicopters, which showed a steady growth in the past decade on the back of mainly Asian exports, will also resume for the Russian forces. The Russian Helicopters corporation, which was formed in 2006, produced 214 helicopters in 2010 and is expected to deliver 260 and 300 helicopters in 2011 and 2012, respectively.

Russian Helicopters announced in May it had signed the first of three long-term orders for around 1,000 helicopters for the Russian Air Force in the next decade, include 220 Mi-28N and 40 Mi-35M attack helicopters, 120 Ka-52 reconnaissance/attack machines, 26 Mi-26 heavy transports, 100 Ka-60 training/electronic warfare, and 30 Ka-226 training helicopters, up to 70 Ansat trainers and 500 Mi-8 transport helicopters (CAST data).

Procurement of transport aircraft remains in a poor state. The Russian Air Force has not received a single new transport plane since 1992, and production capacity has been largely neglected and lost.

The situation has been aggravated by the loss of the Antonov design bureau to Ukraine after the disintegration of the Soviet Union, and the end of Il-76 production at the TAPO plant in Tashkent.

The existing fleet of about 300 military transport planes is outdated and need replacing.

“Several projects will have to be started from scratch and demand additional investment in production potential and human resources, which makes the whole situation even more complicated,” says Maxim Pyadushkin, editor-in-chief of Russia and CIS Observer aerospace journal.

Russia is expected to start mass production of a modernized version of its long-serving Ilyushin Il-76 heavy-lift military transport, known as the Il-476, in 2013-2014. The new aircraft will have PS-90 engines and modernized avionics allowing a smaller flight crew.

Russia has also again decided to take part in the Ukrainian An-70 propfan transport project, after years of indifference. It is also taking part in production of a modernized version of the An-124 super-heavy transport in cooperation with Ukraine. Low-rate production may begin in 2015-2016.

Other key projects for the air force are the production of the Su-35 fighter jet and the Yak-130 combat trainer, now in production at the Sokol plant in Nizhny Novogorod. The air force also has aspirations for modernization of its small strategic bomber fleet, and has funded a program for new precision weapons to arm it.

The MAKS-2011 air show will be held at Zhukovsky outside Moscow on August 16-21. In all, over 600 companies, including over 150 foreign, have registered to take part in the show.