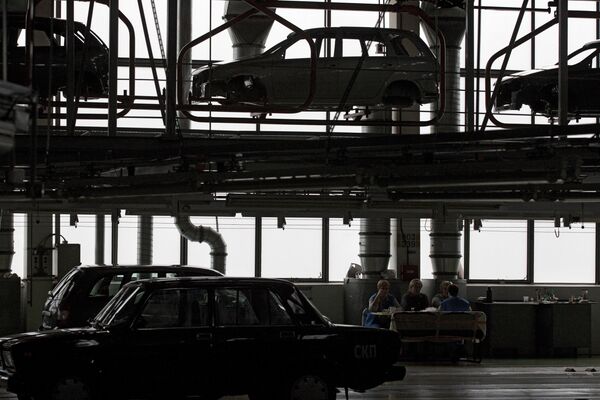 Russia's largest car maker AvtoVAZ announced a rare excursion into profitability on Thursday, according to Russian accounting rules, but only because of massive state support, analysts said.

AvtoVAZ, which has a history of being loss-making and had a heavy debt burden until recently, has been able to improve its financial position and boost sales with the help of the state-backed 'cash-for-clunkers' program.

AvtoVAZ posted a 2 billion ruble ($70 million) net profit to Russian Accounting Standards in the first half of 2011, after a 724 million ruble loss in the same period last year, AvtoVAZ said on Thursday.

The company's first-half revenues rose 41 percent to 82.865 billion rubles, up from 58.762 billion rubles the year before, AvtoVAZ said in a statement.

Under the 'cash-for-clunkers' program, the government gave buyers 50,000 rubles toward a new Russian-built vehicle if they turned in a car more than ten years old to be scrapped.

The automobile scrappage program started in early March with a budget of 10 billion rubles, and was originally due to expire in November 2010.

Later the Russian government decided to extend the program until the end of 2011 and grant it another 5 billion rubles.

Maxim Lobada, an analyst at BrokerCreditService, said AvtoVAZ would run into huge problems, if the government decides not to further extend the scrappage program.

"Constant extension of the 'cash-for-clunkers' program is in fact an instrument of the government's direct support of AvtoVAZ, which is the program's core beneficiary," Lobada said.

"When the program is over, both the company's sales and revenues will plummet. In case it happens before the company's complete integration with Renault-Nissan, AvtoVAZ will face a hard financial situation and will once again have to resort to large-scale borrowing," he added.