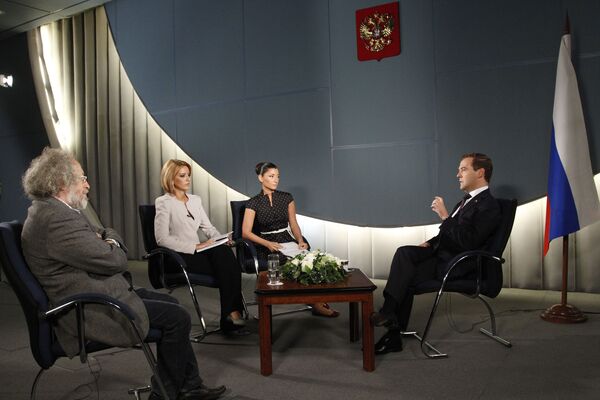 © RIA Novosti . Vladimir Rodionov
/
Go to the photo bank
Subscribe
Russian President Dmitry Medvedev said on Thursday he supported the idea of an international tribunal for Georgian President Mikheil Saakashvili, but said some countries would make such a tribunal unlikely.

Russian President Dmitry Medvedev said on Thursday he supported the idea of an international tribunal for Georgian President Mikheil Saakashvili, but said some countries would make such a tribunal unlikely.

"If I were asked, I would say yes," Medvedev said in an interview with Russian and Georgian media when asked about the possibility of Saakashvili facing a tribunal.

Russia and Georgia began a five-day war on August 8, 2008. Russia accused Georgia of attacking its breakaway republic of South Ossetia in an attempt to bring it back under central control, killing several Russian peacekeepers.

"I consider this a glaring violation of international legal norms," Medvedev said. He noted however that the issue was contentious and added: "The creation of such an international tribunal is unrealistic."

Moscow is "indifferent" to a resolution condemning Russia's "occupation" of Georgia, recently adopted by the U.S. Senate, the Russian president said.

"Those Senate statements are unfounded," Medvedev said. "They represent the opinion of certain elderly Senate members, who, for some subjective reasons, sympathize with certain people," he said. "This is a foreign parliament. I don't care about it."

On July 29, the U.S. Senate unanimously adopted the resolution calling on Russia to respect Georgia's territorial integrity and to withdraw its troops from the breakaway republics of Abkhazia and South Ossetia. Russia said the resolution was "no more than a PR move" that encouraged Georgia's "revanchist sentiments."

Medvedev said on Thursday he saw no grounds for South Ossetia to become part of Russia.

"There is no legal or factual basis at the moment. That's why I signed decrees to recognize [its] independence," he said.

Earlier on Monday, Prime Minister Vladimir Putin said that it was up to the Ossetian people to decide whether their country should join Russia.

Medvedev also said Russia would not make concessions as payment for entry to the World Trade Organization (WTO) after Georgian aggression against South Ossetia.

"If under the brand of WTO accession someone is trying to push through changes to the political situation, then we certainly will not agree," Medevedev said in an interview with Russian and Georgian radio and television.

The president said, however, that should Georgia stop opposing Russia's accession to the world trade club, "this may become... a contact point that would constitute a basis for the resumption of [Russian-Georgian] trade and economic relations, and maybe even diplomatic relations."