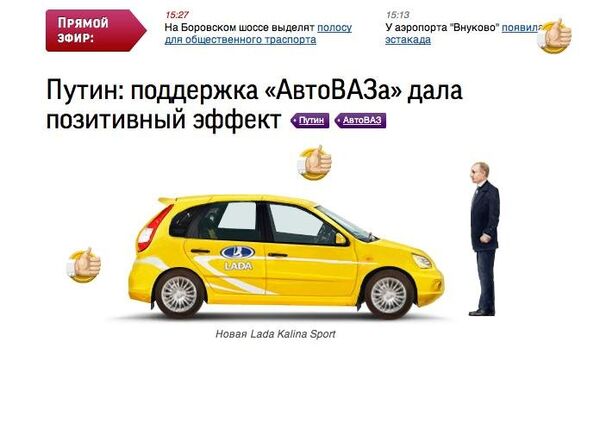 The goal of the "Like Putin" game is to boost "VVP," a Russian abbreviation which is both the Russian term for GDP and the Russian premier's initials.

Like in many platform games, two-dimensional Putin moves along various locations to gather bonuses, hearts and medals.

Several political scientists told Business FM the game is just a part of the forthcoming election campaign, others argue that Putin's image has long been a part of mass culture.

"I'm not quite sure that such things are somehow initiated by Putin or his circle. His image probably became something absolutely different from Putin himself," analyst Alexei Makarkin said.

A government source said they were not notified about plans to make Putin an online game character.

Alexander Kabakov, the head of the Agency One company, which created the game, said it was created as a promotion stunt for the company.

"We were afraid that the reaction would be bad, but it seems to me that we made an enjoyable game. We were thinking about a striking move to promote our agency... And Vladimir Putin immediately came to our minds," he said.

Putin's image has earlier been used to advertise a fishing shop, a shopping mall, a travel agency and even lawn grass.