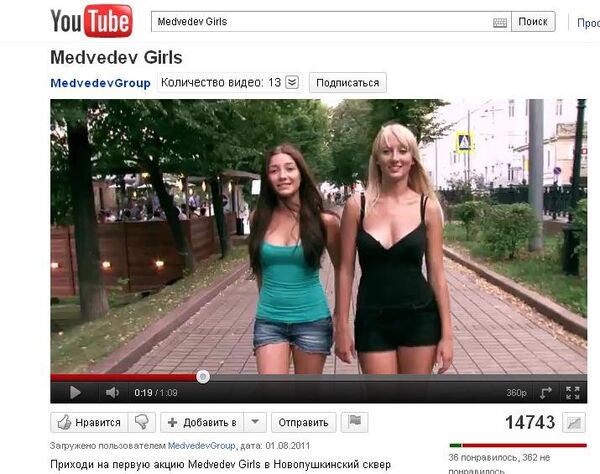 In a video released on Monday, two girls dressed in casual tops, shirts and stilettos stroll through a Moscow park while introducing their ideas.

“We are from the Medvedev, Our President group. Call us Medvedev Girls. We are ready to do anything for Dmitry Medvedev,” the girls state.

Unlike the Putin Army clip, in which the girls vowed to “rip up or off someone or something (that something being a bra in the clip)", the Medvedev Girls shy away from such personal statements of passion for Russia’s president.

Instead they demonstrate their support for an “anti-beer” bill signed by Medvedev last week. Under the bill, which is due to come into force on January 1, 2013, beer is classified as alcohol, rather than a foodstuff as it is now. This means it can only be sold in licensed stores and will not be able to be drunk in public places.

“Unfortunately the bill will only come into force in 2013,” one of the skimpily-clad girls, Anna, says. “But we have decided to support it now and teach people to stop drinking in public right now.”

“So, it’s time to choose - beer or us,” Anna goes on, lifting up her top to reveal the lower part of her breasts. The clip stops there.

Both the Putin and Medvedev “strip clips” have drawn lots of attention, but it is unclear who exactly is behind them. Some analysts suggest they may have been created to discredit the Russia’s ruling tandem ahead of parliamentary and presidential polls.

“These campaigns are made to disgrace both Putin and Medvedev. Their content has a clearly provocative character,” Alexei Mukhin of Russia's Center for Political Information, said.