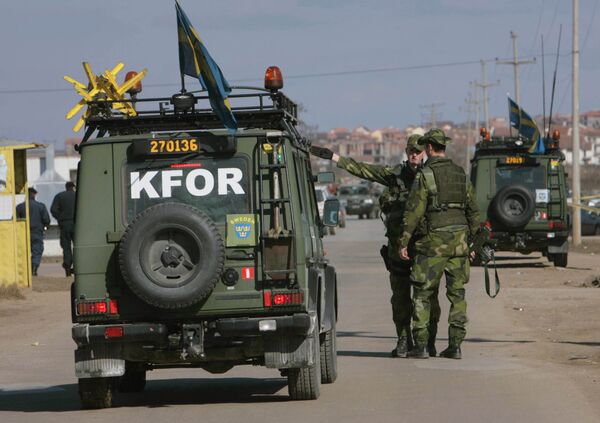 © RIA Novosti . Iliya Pitalev
/
Go to the photo bank
Subscribe
Unknown gunmen attacked NATO peacekeepers in northern Kosovo for the second time in the past few hours, the Kosovo Force (KFOR) said in a statement.

Unknown gunmen attacked NATO peacekeepers in northern Kosovo for the second time in the past few hours, the Kosovo Force (KFOR) said in a statement.

NATO peacekeepers have been deployed to Kosovo's Serb-dominated north after clashes broke out in the area on Monday following the Kosovo authorities' decision to send special police forces to the border to enforce a ban on imports from Serbia, a move opposed by local Serbs.

Kosovo officials later said they ordered the withdrawal from the border posts after government customs officers had been installed at the sites.

Late on Wednesday, a group of several dozen people in masks were reported to have attacked the Jarine border crossing post in northern Kosovo with Molotov cocktails. The attackers reportedly approached the checkpoint from the north (Serbian-controlled territory).

There have been no reports of victims of injuries.

Earlier on Wednesday, some media reports said the Brnyak border crossing post was attacked and set on fire by a group of Kosovo Serbs. The reports have not been confirmed, but KFOR said security was strengthened at both border crossings.

Several hours before the attack of the Jarine checkpoint, two Mil Mi-171 (Hip) helicopters carrying Croatian peacekeepers were attacked by unknown gunmen in the area, the Croatian Defense Ministry said. No one was wounded in the attack.

KFOR Commander Gen. Erhard Buehler has been negotiating with representatives of Kosovo Albanians and Serbs to settle the situation, the KFOR statement said.

Serbian President Boris Tadic has condemned the attacks on peacekeepers. He said, however, that Belgrade "will not go to war" in response to Kosovo attempts to seize border checkpoints and will use only diplomatic means to resolve the conflict.

Kosovar Prime Minister Hashim Thaci has blamed the violence on the Serbian side.

Kosovo, which unilaterally proclaimed its independence from Serbia in 2008, has been recognized by a total of 76 out of 192 UN member states.

Serbs account for up to 10 percent of Kosovo's population, making up the biggest non-Albanian community remaining in the breakaway region following the 1998-99 Kosovan war of independence.