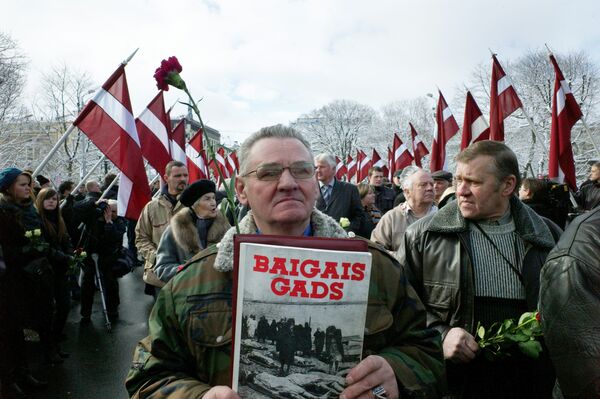 The Estonian prime minister said annual meetings of Waffen-SS veterans in his country have nothing to do with Nazi ideology, Estonia's Postimees daily reported on Friday.

The Estonian prime minister said annual meetings of Waffen-SS veterans in his country have nothing to do with Nazi ideology, Estonia's Postimees daily reported on Friday.

Prime Minister Andrus Ansip, who is currently on an official visit to the United States, said at a meeting with representatives of U.S. Jewish organizations that the meetings of Nazi veterans are held in remembrance of those killed in World War II.

The Estonian people, he said, suffered greatly both from Communism and Nazism and the gatherings of Waffen-SS veterans do not mean that Estonia reflects anti-Semitism at the state level.

Ansip also said he is seriously concerned that some countries are attempting to show Estonia as a country that supports and promotes neo-Nazism.

Since 2005, Russia has regularly introduced draft resolutions to the UN General Assembly condemning the glorification of Nazism. Every year, the resolutions are supported by an increasing number of countries.

Before entering the war in 1941, the Soviet Union occupied the Baltic States, and many Estonians saw siding with the Nazis as a way to regain the independence the country enjoyed from 1920 and until 1940.

Parades in honor of Waffen-SS veterans, involving veterans from the 20th Estonian SS Division and their supporters, are held annually in Estonia. The next one is scheduled for July 30. Russia has repeatedly criticized the Baltic State for allowing these parades to take place.

In April 2007, a Soviet war memorial was dismantled in the Estonian capital of Tallinn just before the May 9 Victory Day celebrations in Russia. The move led to street protests in which over 1,000 people were arrested and one Russian national was killed.