Russian shipyard under scrutiny for misuse of defense order funds 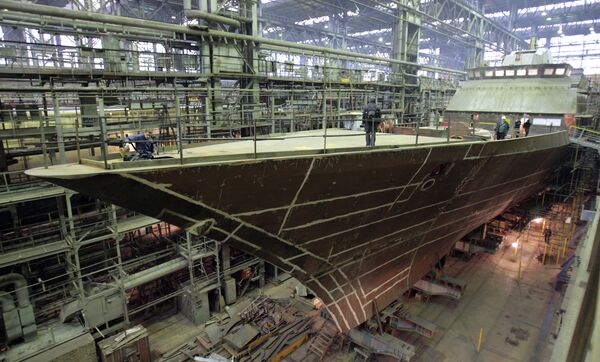 © RIA Novosti . Alexey Danichev
/
Go to the mediabank
Subscribe
International
India
Africa
Police in St. Petersburg have launched a criminal probe into activities of the management of the Severnaya Verf shipyard that put the implementation of state defense order at risk.

Police in St. Petersburg have launched a criminal probe into activities of the management of the Severnaya Verf shipyard that put the implementation of state defense order at risk, Russia's Kommersant daily said on Friday.

According to the paper, preliminary investigation has established that in 2010 the company transferred 5.9 billion rubles (over $212 million), received in line with defense order, in an attempt to save Mezhprombank, which later became bankrupt.

Severnaya Verf was one of the founding shareholders of Mezhprombank.

"Following an inquiry into the management's unlawful activities, which put the obligations under the state defense order at risk and could lead to material losses, investigators opened a criminal case on charges of abuse of power," Kommersant cited a statement issued by prosecutor's office in Kirovsky district of St. Petersburg.

Prosecutors believe that the management of the company did not take appropriate steps to ensure the return of the federal funds and put the implementation of defense order at risk.

The Defense Ministry has already expressed concern over the situation at the Severnaya Verf as the launch of the first Admiral Gorshkov class frigate has been postponed from 2011 until 2012.

Severnaya Verf has signed an exclusive contract with the Defense Ministry on the construction of all new Steregushchy class corvettes and Admiral Gorshkov class frigates under Russia's ambitious arms procurement program until 2020.

At least three corvettes and two frigates are currently at different stages of construction at the shipyard.

Russian President Dmitry Medvedev instructed the government in May to take adequate measures to improve the situation with the state defense order and punish the officials directly responsible for the disruption of the program.

Since Medvedev's orders, a number of military and defense industry officials have been fired and reprimanded for their poor performance in the implementation of the program.