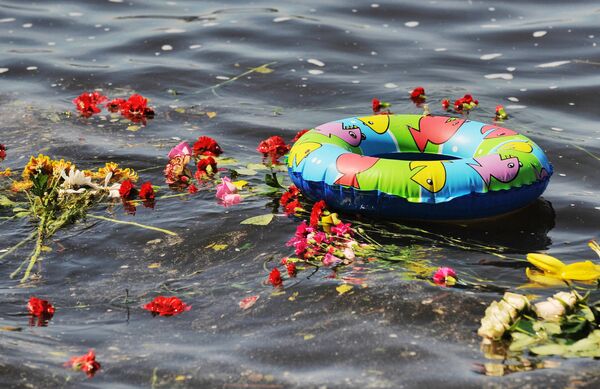 © RIA Novosti . Grigoriy Sisoev
/
Go to the photo bank
Subscribe
Investigators have questioned the captain of a ship that failed to come to the aid of the Bulgaria riverboat, Russian Investigative Committee spokesman Vladimir Markin said on Tuesday.

Investigators have questioned the captain of a ship that failed to come to the aid of the Bulgaria riverboat, Russian Investigative Committee spokesman Vladimir Markin said on Tuesday.

"Alexander Yegorov, the captain of the Dunaisky 66 [cargo] ship has been brought from Volgograd to Kazan and questioned as a suspect in a criminal negligence case...He will remain in Kazan until the investigation is over," Markin said.

The Bulgaria sank during a storm in Russia's Volga River on July 10. Two ships, the Dunaisky 66 and the Arbat, reportedly passed by the ship in distress without giving it any assistance.

Yegorov and the captain of the Arbat ship, Yury Tuchin, face up to two years behind bars if found guilty of deliberately ignoring a vessel in distress.

The bodies of 114 victims have been recovered, while 79 people were rescued after the boat sank on Sunday in the Volga River about 80 kilometers south of Kazan, the capital of the Russian republic of Tatarstan. There were 208 people on board the vessel, which was designed for 120 passengers.

Survivors from the sinking Bulgaria cruise boat were eventually picked up by another passenger vessel, the MV Arabella, where they received medical assistance.

Police said earlier on Tuesday that six out of 15 passengers that were previously reported missing "have been found" through contacts with their relatives.

Prime Minister Vladimir Putin has blamed "irresponsibly, negligence and greed" for the tragedy.

The Bulgaria was critically overloaded and operators had no license to organize cruises.

It was operated by what turned out to be an inexperienced crew to many of whom it had been their first official trip.

Some crewmembers were aged 17 to 18, including a sailor, a trainee, cooks, waitresses and entertainers.