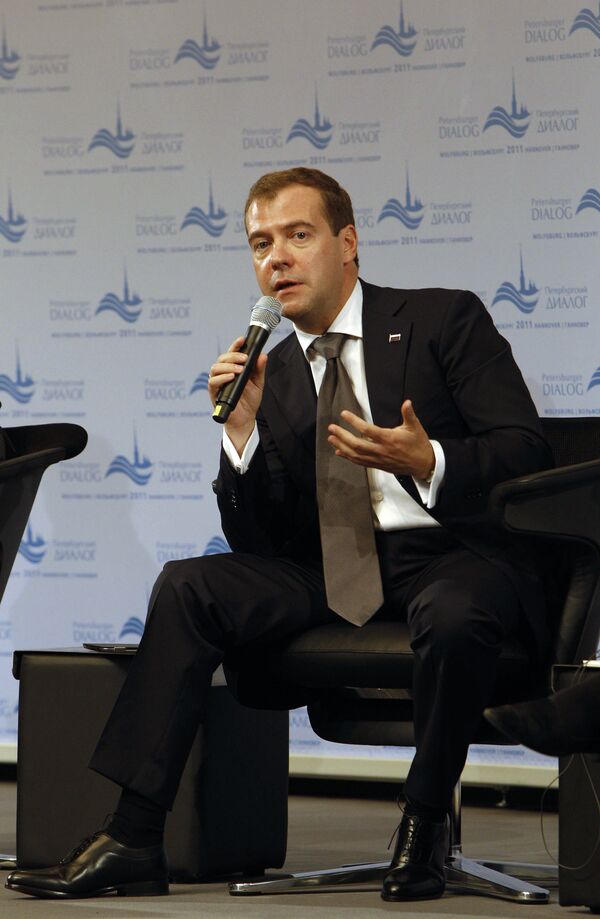 The Berlin-based organization dropped its plans to award the prestigious prize to all four nominees in 2011 because its plans to give Putin the prize as a "role model for enlightenment, dedication and the public good" had come under massive attack in the media and the political community.

"I believe that any public organization awarding prizes may choose who to award and who not, who to like and who not. But if the decision was made, it should be implemented. Otherwise, this is a display of cowardliness and inconsistency," Medvedev told journalists in Hannover after Russian-German intergovernmental consultations.

Putin was to be honored for his contribution to Russia's "stability through the interaction between prosperity, economics and identity," as well as to the reliability of German-Russian ties. But many German public figures have protested the plan, saying his human rights record made him an unacceptable candidate.

The prize, a small statue of a quadriga - a chariot pulled by four horses - on top of the Brandenburg Gate in Berlin, was to have been bestowed upon the Russian premier October 3, the Day of German Unity.

Several Quadriga board members, including Cem Ozdemir, a co-chair of the German opposition Green party, Wikipedia founder Jimmy Wales and history professor Edgar Wolfrum, withdrew from the board in protest over the decision.

Former Soviet leader Mikhail Gorbachev and former Czech President Vaclav Havel have won the award in the past.

Havel said he would return his award if Putin received one this time.

"The Quadriga prize issue is not a topic for me to say anything. This should just be taken notice of," she said.