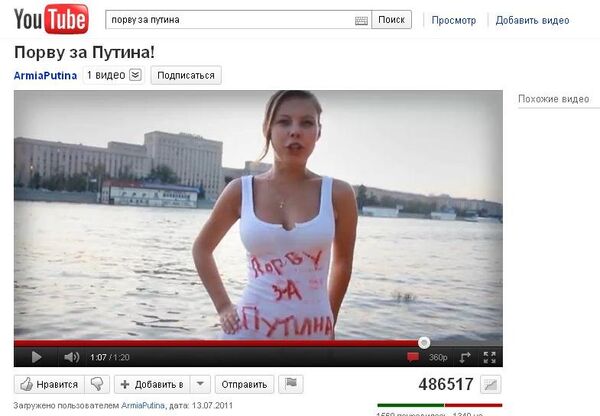 In the video, a leggy blonde in a black suit espouses her love for Putin while walking purposefully through central Moscow: “He’s a first-rate politician and a chic guy… There are millions who adore him, who trust him. But there are many people who throw mud at him. Maybe they’re scared? Or maybe out of their own weakness? Because they’ll never be in his place,” she carps.

Yesterday one of my friends (a Turkish journalist) called me in a buoyant mood.

No, he did not mean he would like to conduct his military service in Russia. He was also not speaking about Putin’s newly-created political movement, the All-Russia People’s Front, which is not aimed at foreigners anyway.

His attention (like that of many others around the world) was grabbed by an online campaign launched by a group of young Russian women whose declared goal is to promote Putin - by rather risque means - as the next Russian president in election year 2012.

The campaigners, describing themselves as “beautiful, young and smart girls” who believe that the Russian prime minister is a “worthy and fair politician and a gorgeous man,” have posted a professionally-made video on the internet, which immediately captured much attention in Russia, and also abroad.

In the video, a leggy blonde in a black suit espouses her love for Putin while walking purposefully through central Moscow: “He’s a first-rate politician and a chic guy… There are millions who adore him, who trust him. But there is a small group of people who throw mud at him. Maybe they’re scared? Or maybe out of their own weakness? Because they’ll never be in his place,” she carps.

The girl then rips off her shirt in proof of her devotion to the prime minister, showing some plenty of skin and calling on other girls to follow her example and “rip off something, or someone” for Putin.

The foreign media were delighted. Headlines declared: “Russian Women Urged To Strip For Putin,” “Putin's Army tries sexy messaging ahead of 2011 [parliament] elections,” “Jiggle your breasts for President Putin,” “Strip for Putin, win iPad 2.” The last headline, from CBS News, referred to the prize promised to the winner of a “prove-your-love-to-Putin” video contest announced by the campaigners.

“The social-networking phenomenon is urging women to tear their clothes off for Vladimir Putin,” the Christian Science Monitor wrote. “It's part of a bizarre range of PR activities rushing into a vacuum of real political competition.”

“During Russia's Soviet era, nudity in advertising was taboo but has since become widespread, a fact which has outraged Russian feminists who say it only intensifies an already sexualized culture where prostitution is common,” Reuters noted.

“At first I thought the girl was a politically motivated voter,” a US female internet user commented on one of the articles, “but the way she worked those boobs at the end she looked more like a hooker.”

This is not the first time Putin’s image has been used in brazen PR campaigns. Last year, a group of female Moscow State University journalism students prepared a 2011 calendar for Putin's birthday, headlined "We Love You Vladimir Vladimirovich!" and featuring pictures of the ladies clad in lingerie.

“This is Russia,” my journalist friend mocked me. “Putin, Russian girls and matryoshkas.”

He has certainly heard about Dostoyevsky, Tolstoy and Solzhenitsyn, and he has even read “Crime and Punishment” and “Anna Karenina.” But he also has read, as many of his compatriots did, those dozens of articles in the Turkish newspapers in which a female Russian tourist was reported to have agreed to be filmed naked in a Turkish movie for just $100.

Maybe they are all mistaken and there is some deeper meaning hidden behind the saucy pictures and provocative videos? Some analysts have speculated that the controversial PR actions might well be aimed not at promoting, but at discrediting Putin, who enjoys large support among the more conservative elements of Russian society.

Whatever the girls’ political motives, they definitely achieved at least one of their declared goals: making them “internet stars” for a day.