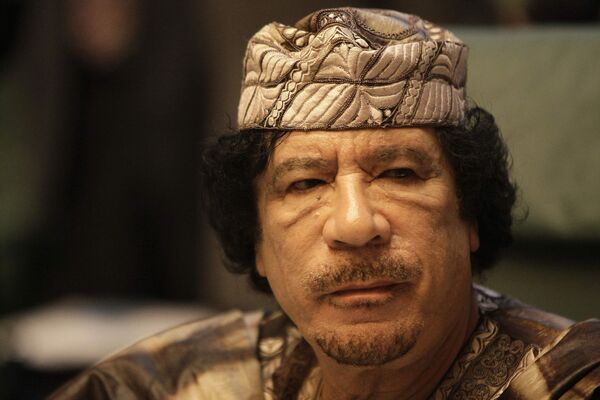 Libyan leader Muammar Gaddafi called on his supporters to fight to the death for control of Libya's oil, the bulk of which lies in the rebel-held east. Rebel forces are rushing headlong into battle following an extremely important decisions made by the Libya Contact Group late last week.

Libyan leader Muammar Gaddafi called on his supporters to fight to the death for control of Libya's oil, the bulk of which lies in the rebel-held east. Rebel forces are rushing headlong into battle following an extremely important decisions made by the Libya Contact Group late last week. The geopolitical order continues to change before our eyes. But one thing remains constant: Russia's inability to choose a course on Libya.

The battle for Brega

On Monday, the Libyan rebels will launch another, possibly decisive, assault on Brega, a key port city in the country's northeast. This would be a huge strategic victory, as a significant portion of Libya's oil exports depart from Brega. It is also home to Libya's oldest oil refinery, built over 50 years ago, and several chemical plants.

On Saturday, loyalist forces equipped with Soviet-made Grad multiple rocket launchers had forced the rebels to retreat to their former position some 20 km from the city. At least 10 rebel fighters were killed and almost 200 wounded. However, after a break on Sunday, the rebels announced their intention to retake the city, despite the serious firepower they are up against. They hope to finally hold this key industrial center, which has changed hands more than once.

In response, Gaddafi urged his supporters "to die protecting their oil, so that it doesn't fall into the hands of the NATO-controlled gang of traitors." His spokesman, Moussa Ibrahim, spoke in much the same vein: "We are ready to kill and to die for our oil." Over the weekend, rallies in support of the government took place in Tripoli and several other cities in the country's west, such as Az Zawiyah, home to another important oil refinery. But the rebels can rest easy knowing that the bulk of oil resources are located in the east, which they largely control.

NATO stepped up its air support for the scattered rebel units over the weekend, but perhaps even more important were the international decisions taken shortly before.

While there is a stalemate on the frontlines, there has been a dramatic shift on the diplomatic front - one with ramifications for the entire geopolitical order. The foreign ministers of almost 40 countries officially announced for the first time at their meeting in Istanbul on July 15 that the goal of the military campaign is to overthrow Col. Gaddafi and the regime he has built since 1969.

The Libya Contact Group's final communique in Istanbul states this in no uncertain terms. The group includes all NATO members as well as several leading Arab and African states.

NATO clarifies its goals in Libya

The document reads: "The Gaddafi regime no longer has any legitimate authority in Libya," and "Gaddafi and certain members of his family must go." Participants in the meeting have decided to recognize the opposition National Transitional Council as "the legitimate governing authority in Libya." NATO has not only supported one side in a civil war for the first time in history, it is aggressively pursuing regime change in a sovereign country.

NATO was less straightforward about its intervention in Yugoslavia in the late 1990s. Elections were even held in the country a year after the NATO bombings. President Slobodan Milosevic was eventually forced out of power and sent to the International Tribunal, but NATO's conduct was much more reserved at that time. Saddam Hussein was toppled in 2003 by international forces, but it was not a NATO operation. Not all NATO members agreed to take part in the U.S.-led invasion.

Now we are witnessing a completely new phenomenon. Paradoxically, NATO claims that UN Security Council Resolution 1973 of March 17, adopted a few days before the war, sanctioned all the necessary measures to protect Libyan civilians. Russia abstained from the vote, but President Dmitry Medvedev has expressed his surprise on several occasions that NATO has exceeded the Security Council mandate.

After French fighters dropped the first bombs on Libya in the evening of March 19, the NATO command was quick to emphasize that its missions did not involve regime change in a sovereign country. The official goal of the war, which will enter its fifth month on July 19, was to protect the rebels in the country's east.

Admiral Mike Mullen, the chairman of the U.S. Joint Chiefs of Staff, said on March 20 after the initial round of bombing that the overthrow of Muammar Gaddafi is not the goal of the mission.

NATO has finally confirmed what everyone has suspected from the very start - the goals of the war are far more ambitious. Now that the rebels have been recognized as the Libyan government, they can legally claim the copious frozen Libyan assets held in foreign banks and investment funds. They exceed $30 billion in the United States alone. The Libyan government and the Gaddafi family also have bank accounts in Italy, France, the United Arab Emirates, and other countries. They have been frozen since the start of the war, but now there are calls to turn this money over to the rebel government.

The entire geopolitical order is changing before our eyes. Russia is in a state of confusion: at any rate, it has not settled on a course in Libya. Moscow continues to oppose Gaddafi's overthrow by outside intervention, and yet Medvedev has barred Gaddafi, his family members and the heads of Libya's security forces from entering Russia since mid-March. Moscow opposes a large-scale, protracted war in Libya, and yet it did not veto the Security Council's resolution that NATO has, predictably, interpreted as broadly as possible.

Moscow cannot and will not save Gaddafi. Representatives of the rebel forces are visiting Moscow, and Mikhail Margelov, the president's special envoy, is meeting with them in Benghazi. Yet Russia is refusing to take part in the meetings of the Libya Contact Group. Not a single Russian representative attended the recent meeting in Istanbul even though the fate of this vital North African region was being discussed.

Russia likely wants the old geopolitical order to collapse without its help. And this is exactly what is happening now. But Russia must not miss its chance to start building the new system on the ruins of the old one. We should not forget that after the war, Libya will award multi-billion dollar contracts to help it rebuild, including projects that Russia hoped to get.