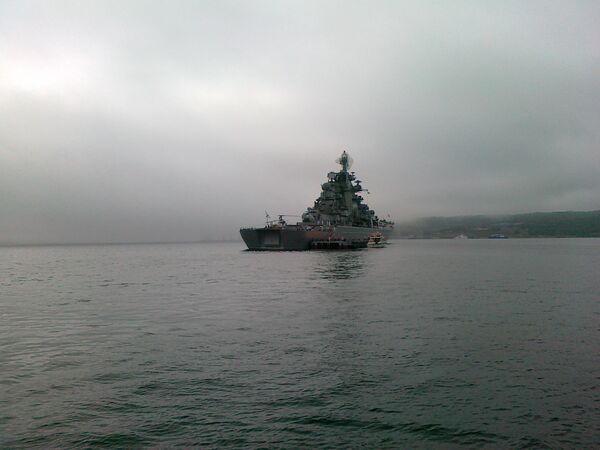 © RIA Novosti . Viktor Krupenin
Subscribe
International
India
Africa
Police in northern Russia have detained a businessman suspected of swindling the Defense Ministry out of more than 265 million rubles ($9.4 mln) through an illegal contract on repairs of the Pyotr Veliky nuclear-powered cruiser.

Police in northern Russia have detained a businessman suspected of swindling the Defense Ministry out of more than 265 million rubles ($9.4 mln) through an illegal contract on repairs of the Pyotr Veliky nuclear-powered cruiser.

Fyodor Barashko, director of the privately-owned Zvyozdochka company, billed the Defense Ministry $12.6 mln last year for repairs on nuclear-power engines installed on the Pyotr Veliky, even though the factory only performed repairs worth $3.2 mln, according to investigators.

"Police discovered over 60 million rubles [$2.1 mln] in cash during the search of the businessman's house," regional police head, Igor Batalov, told a news conference on Monday.

Prosecutors say the fraudster tricked the officials from the Northern Fleet into signing the contract last year by using the similarity of his Polyarny-based company's name to the name of the well-known Zvezdochka shipyard located in Severodvinsk.

Barashko's company, which consisted of a small workshop and a garage, did not even have a mandatory license from Russia's nuclear agency Rosatom to perform repairs on nuclear-power engines for combat ships and submarines.

Severodvinsk-based Zvezdochka, on the contrary, is Russia's biggest authorized shipyard for repairing and dismantling nuclear-powered submarines. It has the capacity to scrap up to four nuclear submarines per year.

Barashko faces up to 10 years in prison on charges of a large scale fraud and running an illegal business.

Batalov expressed certainty that the businessman "will be punished to the full extent of the Russian criminal legislation."

The case is likely to give the Defense Ministry an upper hand in the ongoing clash with the defense industry over inflated prices for armaments.