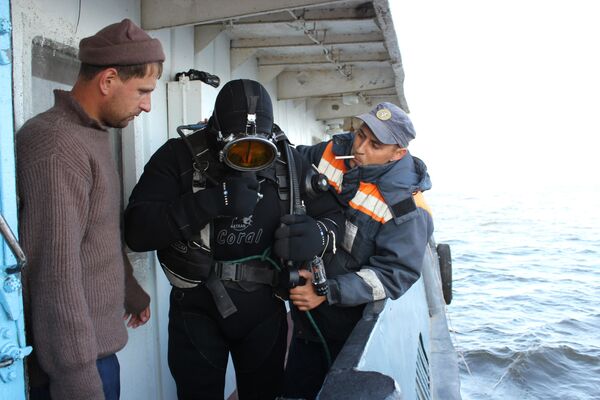 © Ministry of Emergency Situations
/
Go to the photo bank
Subscribe
Rescuers searching the wreck of a Russian cruise ship that sank in the Volga River on Sunday have recovered 53 bodies, bringing the confirmed death toll to at least 54 with over 50 others still missing feared drowned, the regional emergencies center said.

Rescuers searching the wreck of a Russian cruise ship that sank in the Volga Fiver on Sunday have recovered 53 bodies, bringing the confirmed death toll to at least 54 with over 50 others still missing feared drowned, the regional emergencies center said.

A total of 79 people were rescued from the twin-deck Bulgaria which sank on Sunday at 01:58 PM Moscow time (09:58 GMT) near the village of Syukeyevo in the Kansko-Ustinovsky district of the Republic of Tatarstan. One woman was found dead on Sunday.

The ship was on a trip from the town of Bolgar to the port city of Kazan.

The 56-year old river boat, with a legal maximum capacity of 120, was carrying 207 people aboard, including 25 unregistered passengers, the emergencies ministry said.

The Russian Prosecutor's Office said the ship, which was renovated 30 years ago, had no license for carrying passengers and had a number of safety faults, including a broken engine and a list to starboard as well as being grossly overloaded.

The Russian Transport Ministry said however that the vessel passed a regular technical inspection on June 15 this year and was certified fit for use.

The Bulgaria may not have had enough life-saving equipment for all those on board. The ship had life-rafts for 120 people, and two life-boats for 36 people, as well as 165 life-vests for adults and 12 for children, the ministry said.

Witnesses said the vessel rolled on its right side and sank in eight minutes. The ship may have flooded rapidly due to open portholes and the list to starboard, the Investigation Committee said.

The Committee has opened a criminal case into possible safety violations related to the ship's sinking.

Russian President Dmitry Medvedev expressed condolences in his micro blog Twitter to the relatives of those who died on board the Bulgaria.

Medvedev has declared Tuesday, July 12, a day of mourning for those who died on board the vessel.