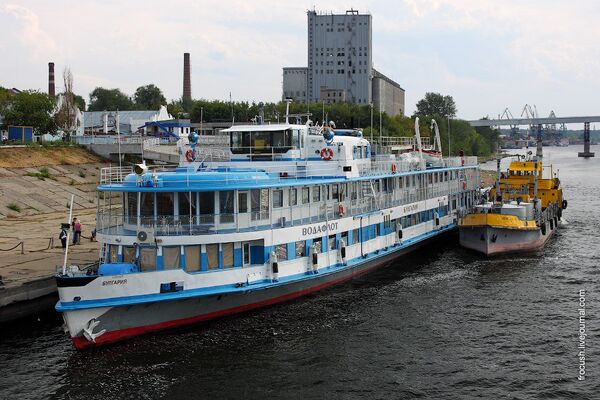 © Photo : Andrei Kuzmitchev
Subscribe
Eighty out of 185 people on board of the Bulgaria cruise ship that sank in Russia’s Volga River on Sunday afternoon were rescued, while 100 are still missing and five were found dead, a spokesperson for the Russian Emergencies Ministry said on Monday.

Eighty out of 185 people on board of the Bulgaria cruise ship that sank in Russia’s Volga River on Sunday afternoon were rescued, while 100 are still missing and five were found dead, a spokesperson for the Russian Emergencies Ministry said on Monday.

Two-decked Bulgaria, built in 1955, sank on Sunday at 13:58 Moscow time (09:58 GMT) near the village of Syukeyevo in the Kansko-Ustinovsky district of the Republic of Tatarstan.

"Eighty people were rescued with 79 of them taken to Kazan [the capital of Tatarstan]. Two people were taken on a cutter and 77 on the Arabella cruise ship that happened to be near the scene of the incident," the spokesperson said adding that 14 people were hospitalized, including one in grave condition.

Rescuers have so far recovered bodies of five people, including a child.

The spokesperson also said that currently 223 people, including 80 divers, are involved in the relief operation. The vessel rests at the depth of 20 meters (65.6 feet) about three kilometers (1.8 miles) from the nearest shore.

A criminal case into the ship's sinking on charges of safety violations has been launched, Russia's Investigative Committee said in a statement.

Russian President Dmitry Medvedev ordered the head of the Investigative Committee, Alexander Bastrykin, to "form an investigative team to establish the cause of the tragedy and find those responsible for the incident."

The Russian Transportation Ministry set up a crisis center that probes into the cause of the tragedy.

Tatarstan's President Rustam Minnikhanov has canceled his vacation over the accident and returned to Kazan to head the emergency operation center.

The Russian Transportation Ministry said in a statement that the vessel successfully passed a regular technical inspection on June 15 this year and was certified for the further exploitation.

The Bulgaria carried all the necessary life-saving equipment, the ministry said adding that the ship had life-saving rafts for 120 people, two lifeboats for 36 people, as well as 165 life-saving vests for adults and 12 for children.

Russia's transport watchdog, Rostransnadzor, also said that the vessel was in good technical condition with all the necessary certifications. There was "an abrupt sinking of the vessel," Rostransnadzor said.

Igor Panshin, the head of the emergencies ministry department in the Volga Region, said that the vessel carried 185 people instead the amount of maximum 120 obliged by technical regulations for this type of the vessel.

"On top of all, there were six fare dodgers on board the vessel. There is a possibility that the number may be higher," he said.

The Russian Tourism Industry Union said earlier that the 56-year old vessel was not renovated unlike other cruise ships used for voyages down the Volga River.

The head of the tourism agency, selling tours on the Volga River, Dmitry Voropayev, said the ships similar to Bulgaria do not have internal water-resistant bulkheads what makes them vulnerable to any hole in the hull.

One of the tragedy survivors said the vessel heaved down on its right side and sank in a three-minute time. "It was almost impossible to survive as there were about 200 people aboard...There were a lot of children. Prior to the tragedy they were taken to the children's room on the second deck."

The survived passenger also said that just after Bulgaria's sinking two vessels passed by the scene of the tragedy and did not stop to save people. "It was what it looked like a barge and an oil ship. They didn't stop."