Lukashenko says ready to deport all political prisoners to EU 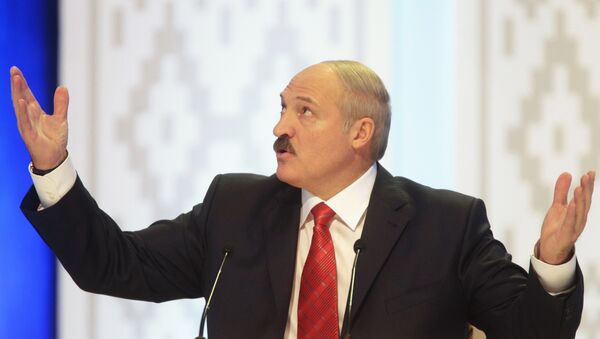 © Sputnik / Ilya Pitalev
/
Go to the photo bank
Subscribe
Belarusian President Alexander Lukashenko said on Thursday he was ready to hand over all prisoners that the EU believes are jailed for political reasons, if Europe agrees to accept them.

Belarusian President Alexander Lukashenko said on Thursday he was ready to hand over all prisoners that the EU believes are jailed for political reasons, if Europe agrees to accept them.

"If the EU wants to take them, no problem, we'll send them out tomorrow," Lukashenko told journalists in the eastern Belarusian city of Shklov.

"I'm ready to put all those for whom the West shows so much concern on a train, or even on board a plane - that would be faster - and send them out. Take them, if you want."

He added that if the European Union confirms its willingness to accept Belarusian political prisoners, he will order to deport "all of them, even those who took to the streets today."

The Belarusian leader, however, rejected the Polish foreign minister's proposal to simply release all political prisoners in exchange for consultations on how to overcome the country's deepening economic crisis.

"I'm not going to haggle with anybody. They [the prisoners] are humans, no matter if they are good or bad, and they live their own lives. I have no intentions of bargaining with the EU and wasting my time on negotiations or talks," Lukashenko said.

Belarus has seen unprecedented economic and political turmoil in recent months, as increasingly frequent protests against the 17-year reign of the authoritarian Lukashenko have combined with a 36% devaluation of the national currency.