Russia and NATO agree to wait until Chicago 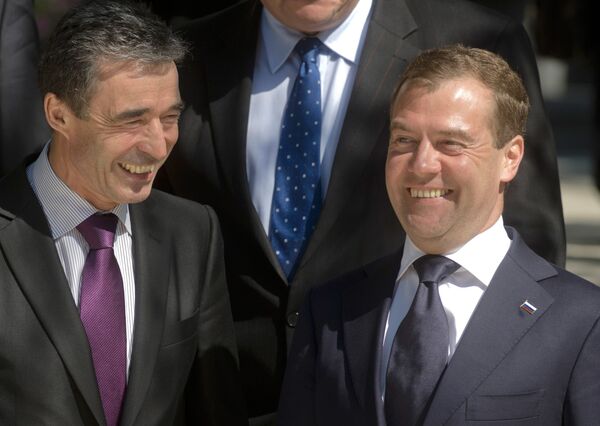 The visiting NATO-Russia Council in Sochi on July 4 (the third in the entire history of our postwar relations with the bloc) decided once again to postpone the discussion of American missile defense in Europe.

The visiting NATO-Russia Council in Sochi on July 4 (the third in the entire history of our postwar relations with the bloc) decided once again to postpone the discussion of American missile defense in Europe. This time the pause will last until the next NATO summit and G-8 meeting in Chicago in May 2012. This is inspiring because Chicago is essentially the home city of President Barack Obama - he was a senator from Illinois and Chicago is the state's biggest city. Obama has already established his headquarters there for the 2012 elections.

Matters have not yet come to radicalism

After the council meeting, President Dmitry Medvedev told NATO ambassadors that he was pleased with its results. "I think, in general, we are all inspired by the results that were achieved. I was told that the session of the NATO-Russia Council that just concluded was quite productive on the whole."

This is good news. Recently, these sessions have been looking more and more like meetings between people wearing different hearing aids. Everyone hears only what they want to hear and offers different, sometimes contradictory, interpretations of what was said.

But this time NATO Secretary-General Anders Fogh Rasmussen announced that concerning the missile defense project, "we are starting to see things in the same way," and that it is better to come to a good agreement on the issue, rather than a quick one. The second part of the statement is clear, nobody would argue with that, but the first part is vague, and it is not clear what Rasmussen meant. It's also intriguing that he suggested waiting until Chicago where, as he hopes, "we will reach an agreement on European missile defense."

The council took place at the ambassador level, at which people generally don't expect any breakthroughs. But after the talks, Medvedev hosted NATO ambassadors.

There were persistent rumors to the effect that Medvedev will present NATO with an ultimatum: either we resolve the issue within a year (either they fully integrate Russia into a new missile defense system, or we arrange it on a sectoral basis, whereby Russia and NATO would have their own defense sectors) or Moscow will take appropriate steps. Moscow may develop its missile defense forces, deploy new missiles on its borders or even withdraw from the New START Treaty that Medvedev and Obama signed in April 2010. These were the options presented by Dmitry Rogozin, Russia's envoy to NATO.

It's good that matters have not yet come to these radical solutions, even with a pause that will last till next May when Chicago will host the NATO and G-8 summits.

Rogozin is a pugnacious and emotional man, but he would hardly have made such stern warnings without knowing Medvedev's position.

In principle, Russia is capable of taking these steps, but it must consider the economic and political price of doing so.

This would mean huge spending on a new arms race. In the case of the hypotonic Russian economy, this is akin to a person with acute anemia donating blood. It is unlikely that we could cope with this in the long run. The economies and finances of the NATO countries are far from brilliant either, but it is still easier to find the funds through a collective effort, although the United States would pay for most of it anyway.

A pause until U.S. elections

This is a special demand of the United States, because this is "their" system. It is hard to imagine that Obama would fully renounce his plans of modernizing missile defense in Europe a little more than a year before the presidential elections. He has already changed George W. Bush's plans, and a second concession to Russia would be a too luxurious gift to the Republicans. The U.S. economy is not doing very well, and if it gets worse and Obama yields again to Moscow's pressure on missile defense, he can hardly expect to stay in the White House for another term. And reaching an agreement with the Republicans will be next to impossible.

Probably we'll have to take an actual pause on this issue, and it will last longer than the May meetings in Chicago. Most likely, it will last till the end of the U.S. elections.

It is clear to everyone that an agreement on missile defense must be reached not with NATO, but with the United States, individually.

Russian Foreign Minister Sergey Lavrov continuously repeats that the council operates on a special basis. He spoke to this again in Sochi, remarking that the council "works on an equitable national basis: one country, one vote, not NATO plus Russia." In other words, we must agree not with NATO, but with each member of the council separately. It's unclear, then, why we need a council if we have to reach individual agreements with its members. Does NATO know that each of its members can make individual decisions in the council? But if this is the scheme, there is nothing to be done about it.

The council was set up at the Russia-NATO summit in Rome on May 28, 2002. NATO's official site designates its main purpose as follows: "The (NRC) is a mechanism for consultation, consensus-building, cooperation, joint decision and joint action. Within the NRC, the individual NATO member states and Russia work as equal partners on a wide spectrum of security issues of common interest." But for the time being it seems more like a mechanism for the permanent search of something that can never be found.

There is no guarantee that it will be found in Chicago. Perhaps we really should join NATO, and check the bloc for sincerity. In that case all problems will disappear at once, and we'll celebrate the grand Day of Russia's accession to NATO.