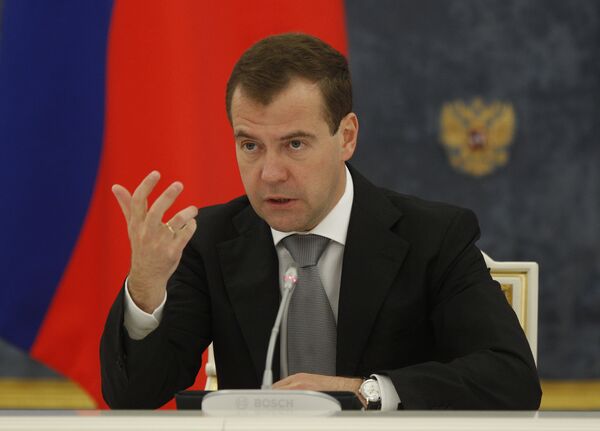 "The federal budget for 2012 and for a planned period of 2013-2014 must be a budget to achieve a trajectory of sustainable post-crisis development, create conditions for the development and modernization of the economy, raise living standards, strengthen the country's defense and security and make state governance more efficient and transparent," Medvedev said in his budget address.

In its work to draft a federal budget for 2012 and for the 2013-2014 period, the government must create pre-requisites for introducing limits on the use of oil and gas revenues and the budget deficit from 2015 "to stabilize and subsequently cut the budget deficit."

Russia needs to switch to a new model of economic development to achieve sustainable growth.

"In the nearest future, an entirely new model of economic growth should be built in Russia, based on an increase in public initiative, mass innovations, an efficient system of social services, and effective financial and industrial structure," Medvedev said.

Russia should increase the role of taxes levied on oil and gas companies, alcoholic and tobacco products; boost revenues from federal property use; and raise the efficiency of state spending to fulfill all social commitments assumed by the state.

The tax burden on the gas sector needs to be further increased to boost budget revenues.

"To increase budget revenues, and taking into account the favorable price conditions on external markets, it is necessary to continue increasing the tax burden on the gas sector, which means collecting surplus revenues from taxpayers receiving them through their operations on world natural gas markets," Medvedev said.

The Russian government is discussing measures to raise the subsoil tax on gas production from next year and double it for the gas monopoly Gazprom.

The government needs to cut considerably its interference in the economy through privatizations, an overhaul of the state purchase system and the expansion of state and private partnership in innovation projects to modernize production.

"The role of the state in direct governance of economic assets must be considerably reduced," Medvedev said. "The Russian government needs to prepare a schedule for the privatization of large share packages in key state-controlled companies to reduce the state's stakes below a controlling interest or give up state participation, except for infrastructure companies or companies related to the provision of state security."

Privatization is intended to create conditions for an inflow of investment and fair competition in areas where "this competition can contribute to intensifying investment, entrepreneurial and innovative activities of private companies, including small and medium business," Medvedev said.

Russia must totally restructure its system of state purchasing and limit acquisitions in which there is no tender process, Medvedev said.

"International practice demonstrates that state demand for goods, work and services is better met if state purchases are incorporated into a unified institutional environment. The federal contract system needs to be of this kind," the address said. "We have to limit cases where a decision is taken on state purchases without a tender."

In the case of goods being purchased from a natural monopoly or corporations and companies with state or municipal involvement, Medvedev also said it was necessary to set up an effective procedure for purchasing activity that guarantees open information on competition, without needlessly limiting the involvement of participants.

Medvedev ordered proposals by December 1 on the possible decentralization of power between federal, regional and municipal governments.

"Powers...should be transferred to regional levels...and to the municipal level," Medvedev said.

The president echoed comments made at the St. Petersburg Economic Forum by Russian businessman Mikhail Prokhorov earlier this month that Russia's current system of governance is unsustainable.

Earlier in June Medvedev announced plans to set up a working group to prepare proposals for the decentralization of power in the country.

The Russian government should offer a 1.5 multiplier for research and development spending by Russian businesses to add to their total expenses to apply for tax benefits, Medvedev said.

The president proposed this measure to apply to corporate expenses from 2009.

"It is necessary to gradually get rid of tax system elements, which obstruct innovative development," Medvedev said.