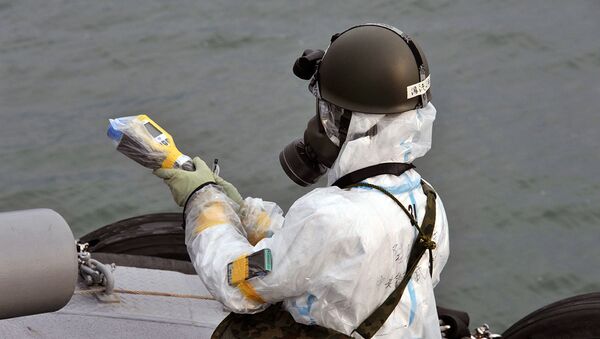 Radioactive strontium has been found on the seabed near the crippled Fukushima Daiichi Nuclear Power Plant, Kyodo reported on Tuesday.

Radioactive strontium has been found on the seabed near the crippled Fukushima Daiichi Nuclear Power Plant, Kyodo reported on Tuesday.

Tokyo Electric Power Company said strontium-89 and -90 was discovered in the seabed soil about 3 kilometers off the coast, some 20 kilometers north and south of the nuclear complex.

Between 10 and 44 becquerels per kilogram of strontium-90 were detected, which has a half-life of 29 years.

Shigeharu Kato, a member of the Nuclear Safety Commission, said further examination was needed to determine if or how the substances can accumulate in marine life, the NHK news agency reported.

A 9.0-magnitude quake struck off Japan's northeast coast on March 11, triggering a tsunami and explosions at the Fukushima Nuclear Power Plant, which caused the worst nuclear crisis since Chernobyl in 1986.

According to Japanese scientists, the tsunami triggered by the quake washed over 561 square kilometers in 23 prefectures. Huge waves reached 10 kilometers (6 miles) inland destroying everything on their way.

The disaster destroyed over 151,000 buildings and killed at least 15,000 people, while 9,893 people still remain unaccounted for.

The government has previously said the damage from the disaster could total $184 billion.