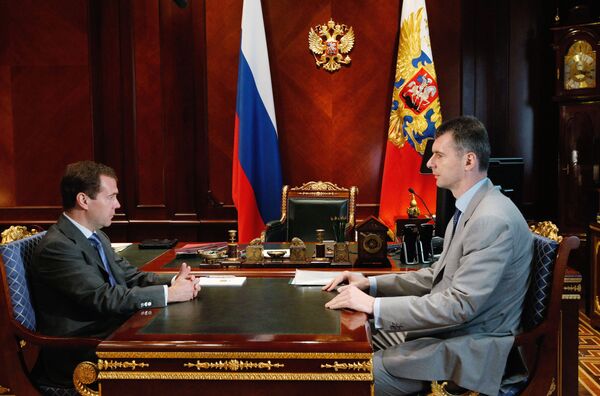 A meeting between Russian President Dmitry Medvedev and billionaire politician Mikhail Prokhorov is a sign that the Kremlin favors the tycoon's Right Cause party, a leading political expert told RIA Novosti on Monday.

A meeting between Russian President Dmitry Medvedev and billionaire politician Mikhail Prokhorov is a sign that the Kremlin favors the tycoon's Right Cause party, a leading political expert told RIA Novosti on Monday.

Medvedev met with Prokhorov earlier on Monday to discuss ideas that the businessman had announced during the Right Cause party congress at the weekend.

"Your ideas in some way correlate with my proposals [on the decentralization of power]. Your ideas to some extent are of a revolutionary character and need to be carefully thought about, but it is obvious that the centralization of power can not last forever, even in such a complicated federal state like Russia," Medvedev said.

"This meeting has a rather symbolic meaning, it is a part of Medvedev's strategy of outlining his liberal image in order to show Kremlin approval of Prokhorov's party," Alexei Mukhin of Russia's Center for Political Information said.

Mukhin said it was unlikely that Medvedev would stand in the 2012 presidential elections under the Right Cause banner.

"If Medvedev decides to run for the presidency, he will need support from a more substantive political structure," Mukhin said, adding that if Right Cause wanted to be the main mover in a presidential bid for reelection, it would have to "demonstrate success during the upcoming parliamentary polls [in December, 2011]."

The United Russia party would at present be the ideal party to back Medvedev, should he choose to stand, Mukhin said.

Although Medvedev has said that he would like to serve a second term, he has yet to announce if he will run. His mentor and former president, Prime Minister Vladimir Putin, has also yet to say if he will seek a return to the Kremlin.

Prokhorov, the president of private investment fund Onexim Group, is Russia's third richest man with an estimated wealth of $18 billion. He was elected the head of Right Cause at the party congress on Saturday. He also owns the New Jersey Nets basketball team.