Some 450 detained in Belarus protests over economy 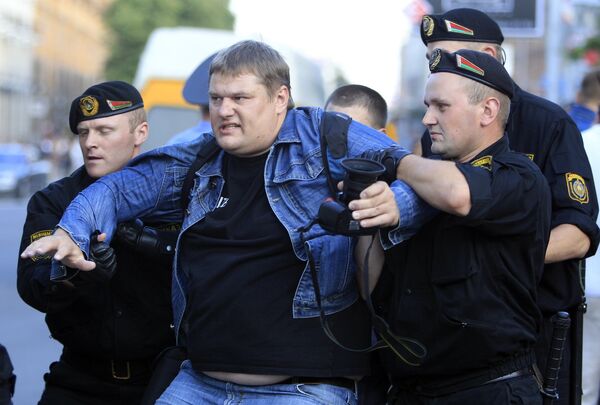 Around 450 people were detained in Belarus on Wednesday as police dispersed protests across the country against the government's economic policies, Belarusian human rights activists said.

Around 450 people were detained in Belarus on Wednesday as police dispersed protests across the country against the government's economic policies, Belarusian human rights activists said.

"About 450 people were detained in Belarus for participating in the Revolution Through Social Media protest action," the Vesna human rights group said on its website.

Some 200 people, including several journalists, were detained in the capital, Minsk, and several dozen protesters were seized in at least 15 other cities and towns, the group said.

There have been no official reports from the Belarusian Interior Ministry on the number of those detained during the protests.

Between several hundred and several thousand people have attended the protest on Minsk's central Freedom Square, according to different estimates.

Police have begun releasing those detained in the capital after issuing administrative offence reports, one of the released protesters told RIA Novosti.

Five of six journalists were among the detainees, a Minsk police source said.

Protesters used the Internet and social networking sites to call anyone dissatisfied with government measures designed to tackle a major economic crisis facing Belarus onto the streets on Wednesday.

A similar protest took place in the Belarusian capital a week ago with an estimated several thousand participants. Belarusian President Alexander Lukashenko has said he would clamp down hard on anyone caught protesting against economic measures.

The Belarusian ruble has come under severe pressure in the first five months of the year from a large trade deficit, generous wage increases and loans granted by the government ahead of the December 2010 presidential elections, which spurred strong demand for foreign currency.

In spring, the country's authorities devaluated the national currency by 36 percent, froze prices on some staple foods and introduced fuel rationing to keep the lid on the deepening crisis.