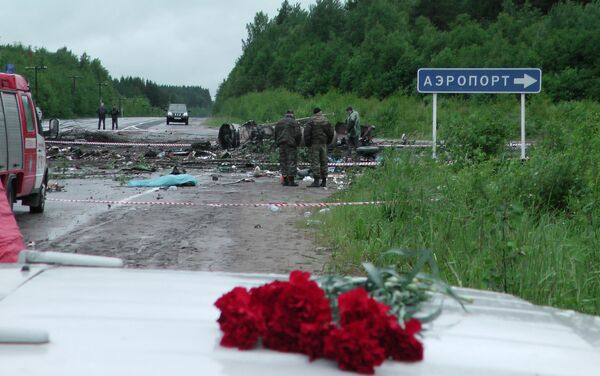 The RusAir jet, which took off from Moscow at 22:30 local time (18:30 GMT) on Monday was due to arrive in Petrozavodsk, the capital of Russia's northwestern republic of Karelia, at 00:04 on Tuesday (20:04 GMT Monday), but crash landed on a highway one kilometer (0.6 miles) away from Petrozavodsk airport, which was shrouded in fog. The aircraft broke up and burst into flames on impact.

Eight of the 52 people on board survived and were taken to local hospitals.

"I do not want to forestall the investigation and so on, but the first surface data show that pilot error amid bad weather is obviously to blame," Ivanov, who oversees transport issues in the government, said at the Le Bourget airshow outside Paris.

The pilot was "looking for the runway till the last moment, but didn't see [it], and then this happened," the minister said, adding that the pilot was "landing right of the runway."

"Unfortunately, this is reminiscent of the recent catastrophe of the Polish plane near Smolensk," he added, referring to the April 2010 crash of a Polish air force plane that killed Polish President Lech Kaczynski and dozens of Polish dignitaries.

Russian Investigative Committee spokesman Vladimir Markin said earlier in the day that various possible causes for the accident were being studied, including human error. A criminal case into the crash has been launched, he said.

A failure of the airport's lighting system was initially named among possible reasons of the crash. But Ivanov said the runway lights only switched off when the plane hit power lines while landing.

"It was discovered later that it [the power line] was broken, obviously, by the [plane's] chassis," he said. "This means it [the plane] broke the cable while landing."

A spokesman for Russian air transport regulator Rosaviatsia also said earlier in the day that the airport's infrastructure, including the lighting system, had been operating normally until the moment when the aircraft hit the electric lines.

According to the spokesman, the plane began to descend earlier than planned for unknown reasons, deviated from the runway and hit trees, and then the power lines.

The head of the federal air transport agency said the plane had hit a 15-meter-tall pine tree before it crashed, adding that there was no fire or explosion on board the aircraft before the crash.

The aircraft's flight data recorders have been recovered, and investigators in Karelia have taken custody of the voice recordings between the air traffic controllers and the aircraft's crew.

"The voice recordings of the air traffic control service at Petrozavodsk airport with the aircraft's flight crew have been obtained, and information requested about weather conditions. Investigators have also taken documentation from Domodedovo airport [from where the aircraft took off] and fuel samples," regional investigators said.

A Health Ministry official said five people out of the eight who survived the crash would be transferred to hospitals in Moscow. One of the survivors will be treated in Karelia, while a decision on whether to move the two remaining patients, a man and a boy who are in serious condition, has not yet been made.

There is one crew member, female flight attendant Yulia Skvortsova, among the survivors, a RusAir spokesperson said.

Four foreigners - one Swedish and one Dutch citizen and two Ukrainians - and a family of four with dual Russian-U.S. citizenship were among those killed in the crash, Russia's Emergencies Ministry said.

Twenty eight of the 852 Tu-134s built have been lost since the aircraft entered service in 1967. Of those, 26 have been lost in accidents, one shot down by ground fire in the Abkhazian-Georgian conflict in 1993 and one blown up by a terrorist bomb over Russia in 2004.

The Tu-134 is sixth highest on the list of aircraft crashes by type according to AirDisaster.com, but that figure can be misleading, as it ignores the fact that an aircraft's safety record is often as much down to the operator as the actual reliability of the aircraft. Many Tu-134s were operated by independent carriers which split off from the Soviet monopoly Aeroflot when the USSR broke up in 1991, many of which had a poor operating safety record.

The Tu-134 is generally regarded by pilots as a rugged, simple and dependable aircraft. Most have been retired because of their poor fuel economy and non-compliance with modern noise regulations outside Russia.

According to AirDisaster.com, most of the nine Tu-134s accidents since 1990 have been attributed to pilot error by flight crews in CIS nation-state airlines.

Leonid Koshelev, President of the Aircraft Owners and Pilots Association of Russia, an aviation lobby group, said poor state regulation of aviation and flight safety in Russia was probably partly to blame for the crash rather than the aircraft itself.

"The circumstances around any plane crash are very specific and I do not think the latest Tu-134 crash should be blamed on the poor safety record for this particular type of aircraft until an investigation of the accident comes up with solid evidence."

"The poor safety record for Russian aircraft on domestic flights is more likely the result of the lack of 'well-oiled' system of state regulatory bodies specifically dealing with flight safety. Rosaviatsia [the Federal Air Transportation Agency] is too busy performing a multitude of other tasks to pay close attention to flight safety and this burden lies mostly on airlines themselves," he said.