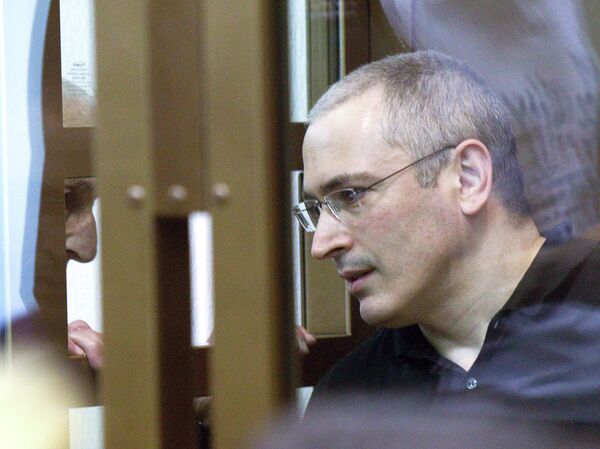 Moscow Preobrazhensky Court returned jailed tycoon Mikhail Khodorkovsky's request to be released on parole to a pre-trial detention center in Moscow, where he was moved last year to undergo a second trial and subsequent appeal hearing, Khodorkovsky's press service said.

Khodorkovsky, the former head of Yukos oil company convicted of embezzlement and tax fraud, appealed against his sentence and a second trial in Moscow. He was sentenced to an additional six years on top of his initial eight year sentence by a Moscow court in December 2010, later reduced by one year. He is now due for release in 2016.

Khodorkovsky's lawyer, Natalya Terekhova, said her defendant was actually denied the right to appeal for parole, as a district court twice took no action on the request, and returned it to the pre-trial detention center.

Tatyana Liminchuk, a spokeswoman for the Karelian prosecutor's office, said last week that in line with the law, parole requests are considered by local courts.

Last week, a source in the penal system administration said that Khodorkovsky was delivered to Penal Colony 7 near the town of Segezha in Russia's northwestern Karelia region.

Khodorkovsky's parents have confirmed that their son was delivered to one of the colonies in Russia's northwestern Karelia region but they were not told to which one, Vadim Klyuvgant, one of the jailed tycoon's lawyers said.

Khodorkovsky was sent to work in a maintenance unit, which includes work in a boiler room, and other duties.

Khodorkovsky served the initial part of his first sentence in Russia's remote Chita region near China and Mongolia, 6,000 km from Moscow.

A law enforcement source said earlier on Friday that Khodorkovsky's business partner Platon Lebedev, serving a 13-year sentence for oil embezzlement and money laundering, has arrived in Penal Colony 14 in the Arkhangelsk Region in northwestern Russia.

Khodorkovsky and Lebedev filed a parole request on May 27, but a Moscow court returned it citing a lack of certain documents.

The two men have denied all charges against them, saying that they were revenge for Khodorkovsky's funding of opposition parties during the presidency of Vladimir Putin, something the Russian authorities categorically deny.