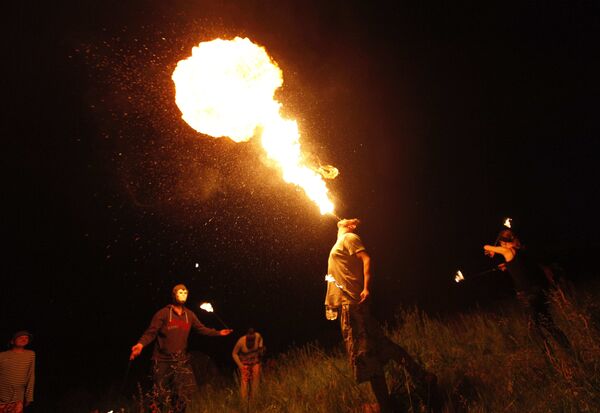 © RIA Novosti . Alexey Kudenko
/
Go to the photo bank
Subscribe
In just three and a half hours by car to the southwest of Moscow you find yourself in a different world, a world of freedom, nature, music and total happiness.

In just three and a half hours by car to the southwest of Moscow you find yourself in a different world, a world of freedom, nature, music and total happiness. This is the world of the Empty Hills (Pustye Kholmi), Russia’s largest open-air non-commercial festival of alternative music and arts, which is held annually in early June.

However, the hills on the picturesque banks of a small river in the Kaluga Region are not at all empty. The festival held on June 9-13 gathered from 30,000 to 70,000 people from many Russian regions and some former Soviet republics although the event has never been widely advertised. It is difficult to count the exact number of participants as admission to the festival is free.

The festival was born eight years ago when a group of 300 enthusiasts held an open-air gathering, which turned into a major event combining features of a music festival, arts master-classes and even a carnival.

The festival, which is often called Russian Woodstock, has no definite music style, it is a mixture of rock, reggae, folk, blues, jazz, electronic music, etc. Musicians, who have never been featured on popular Russian TV channels and radio stations, perform at several wooden stages built in the field by volunteers.

But music at the Empty Hills is not that important. What is really important is the unique and unforgettable atmosphere of freedom, love, spiritual relaxation, positive energy and creativity.

The schedule of concerts is really tight but if you just sit on the grass and listen to the music you will miss many interesting things. You can also walk around the market of handmade crafts, play games, ride a horse and enjoy theater performances, spontaneous jam sessions, poetic recitals and fire shows, attend workshops and master classes for all tastes and ages. You can study photography, folk dancing, doll making, bread baking, bead art, dry and wet felting and other arts.

Those who visit the festival for the first time are most likely to come back and bring their friends and children (the organizers always arrange a playground for the little guests). And indeed, when you see all these smiling and painted faces, fantastic dresses, beautiful girls with flowers in their hair, Chinese lanterns burning on the bridges, a balloon flying in the night skies, colorful installations in the field, you want to stay here forever.

The installations are really impressive. Just imagine a winged horse hanging above the river, a huge snail labyrinth with many small windows, an aquarium, a painted Indian wigwam, a nest with big eggs shining in the night, an enormous blue sofa, which can seat at least 20 people, a man-sized teapot near the stage called “Kitchen” and many other art objects created by Empty Hills enthusiasts.

People arrive at the site of the festival months before the opening and begin building the stages, bridges, restrooms, cafes and other facilities, which visitors will enjoy for just a few days in June. The organization of the festival requires titanic efforts and funds, which are provided by donors and participants but the event is totally non-commercial. Organizers never attract official sponsors and do not advertise the event in mass media.

Freedom is the main concept of the Empty Hills: all musicians and artists perform at the festival for free and visitors are allowed to set their tents up and arrange camps in the neighboring woods at no charge. The only fee is 1,000 rubles (around $30) for a security parking site. And it is really amazing how the festival has survived in the modern world that is ruled by money.

This concept inspires many volunteers to join the construction and technical maintenance efforts and stay to help clean up the territory after the festival.

Empty Hills is a unique gathering of free, sincere and happy people. The festival allows them to be themselves and unite with nature and makes them come to this parallel universe in the Kaluga Region again and again.