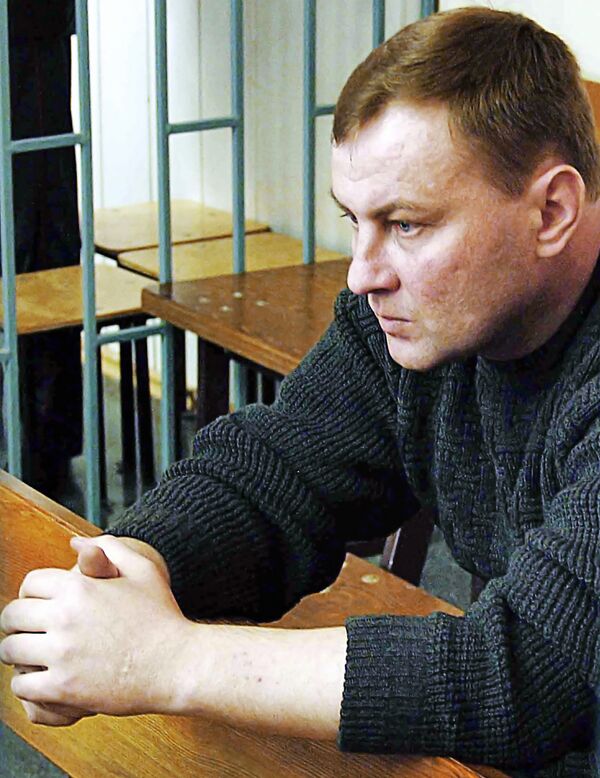 © RIA Novosti
/
Go to the photo bank
Subscribe
Former Colonel Yury Budanov was shot dead in Moscow at about noon on June 10 as he left a notary's office at 38/16 Komsomolsky Avenue. He died on the spot from gunshot wounds (in tentative estimate, the killer made four precise shots).

Former Colonel Yury Budanov was shot dead in Moscow at about noon on June 10 as he left a notary's office at 38/16 Komsomolsky Avenue. He died on the spot from gunshot wounds (in tentative estimate, the killer made four precise shots).

Budanov's case is inseparably linked with the name of 18-year-old Chechen Elza Kungayeva from the village of Tangshi-Chu. As commander of the 160th Guard Armor Regiment deployed in Chechnya in 1999, he was charged with abducting, raping and killing the young woman. He was sentenced to 10 years in prison in 2003 and released on parole in December 2008.

Budanov's trial was one of the first cases linked with the Russian military's actions in Chechnya. He did not deny Kungayeva's murder, rather stating that he thought she was a sniper in an illegal armed group. He ordered his subordinates to take her to the regiment's deployment location and then choked her during the interrogation. Ostensibly, he killed her after she attempted to seize a gun. Budanov later insisted that he had been under extreme emotional disturbance.

The proceedings were slow. Budanov was sent for a psychiatric examination at the Moscow Serbsky Center for Social and Forensic Psychiatry where he was certified as insane due to a contusion. The North Caucasus Regional Military Tribunal then relieved him of criminal responsibility and sent him for compulsory treatment.

However, the decision did not satisfy Kungayeva's family. Their lawyer obtained the Supreme Court's approval for a new trial.

In summer 2003, the same North Caucasus Military Tribunal accused Budanov of murdering Kungayeva. The colonel was stripped of his rank and the Order of Courage and sentenced to 10 years in a high security prison.

A year later, in 2004, the Pardon Commission satisfied his clemency appeal. The decision evoked a wave of protests inside Chechnya.

Would-be Chechen President Ramzan Kadyrov announced that if Budanov was released, "we will find an opportunity to give him his due." The convict withdrew his clemency petition.

In December 2008, the Dimitrovgrad Court of the Ulyanovsk Region, where Budanov served his sentence, released him on parole.

Lawyer Alexei Dulimov, who defended Budanov during his trial, does not rule out that his murder could be linked to the case.

"Everything is interdependent in life," he said, adding that the circumstances surrounding Budanov's murder are likely rooted in his earlier conviction. He noted cautiously that "there were repeated threats on this score."

"Budanov was illegally convicted and illegally served his sentence," Dulimov said. "Enormous efforts had to be taken for his parole release over a very long period. After Markelov was murdered (Stanislav Markelov, who represented the Kungayeva family's interests was shot dead in Moscow in January 2009), some people even tried to link his murder to Budanov's release."

"He was not forgotten," he said. "Nobody else has aroused such feelings in Russia over the past 10 years."

"He did not take such measures (ed. security measures)," Dulimov explained.

"He was a courageous man and always considered himself not guilty. He hoped everyone had common sense, even those who lost their children in the war."

"If this is revenge, it is impossible to conceal such a thing in the Caucasus," he said. "In this sense, the investigators have a good chance to solve this crime."

At the same time, Elza's father Visa Kungayev is confident that Budanov's murder is not linked with his daughter's death.

"The investigators will find everything out, just as they did in the case of my lawyer Markelov," he told RIA Novosti.

Today's murder may have a more dangerous motive - to fuel national strife.

"Most probably, some people may use this murder for political objectives to escalate tensions in the North Caucasus," Duma Security Committee member Mikhail Grishankov told journalists. "There may still be another version - that the murder was designed to stage provocations to escalate ethnic strife and infuriate the military that regretted Budanov's imprisonment."

Spokesman for the Chechen Republic in the Duma, United Russia Deputy Akhmar Zavgayev also believes that the motive behind Budanov's murder could have been "to rock the boat in the country."

"Some people do not like stability and peaceful life," he said. "They have made an attempt to rock the boat in Russia, cast a shadow on law enforcement bodies and escalate ethnic strife. Russia's foes are trying to play the ethnicity card."

Zavgayev added that this is not the first time when "certain forces have tried to put our multiethnic country's citizens at loggerheads."

Meanwhile, official spokesman for the Investigative Committee Vladimir Markin told RIA Novosti that the investigators do not rule out that Budanov's murder is a provocation, but consider it premature to talk about an ethnic trace in the crime.

In the past, Budanov's case evoked fierce confrontation in society.

The Chechen authorities demanded the most severe punishment for him.

"He did not rape one girl - he insulted and humiliated all Chechens," Kadyrov said, commenting on Budanov's attempt to be pardoned.

In response, Budanov's supporters wrote songs glorifying him as a "Russian national hero." Several groups were opened on social networking websites calling him a man who "displayed unparalleled valor and heroism" in the Second Chechen War and "saved 154 GRU Special Forces officers despite orders from above."

Budanov's murder is already the subject of vigorous debates in the blogosphere.

Many bloggers say his murder could lead to the repetition of the recent unrest on Manezhnaya Square and the exacerbation of tensions in the Caucasus.

"Was I the only one to shudder from horror and recall Franz Ferdinand?" Russia Today 24-hour English-language TV news channel Editor-In-Chief Margarita Simonyan wrote on her Twitter page in connection with Budanov's murder, referring to Archduke Franz Ferdinand's assassination that sparked World War I.

But Budanov's support groups have long ceased to be as numerous as they were in the early 2000s during his trial. Budanov served his term, was released from prison and proceeded to live a routine life. If his murder is designed to fuel ethnic strife, then it is hard to say precisely what its effect could be.

Most probably, the teens who marched on Manezhnaya Square last December do not even know who Budanov was.