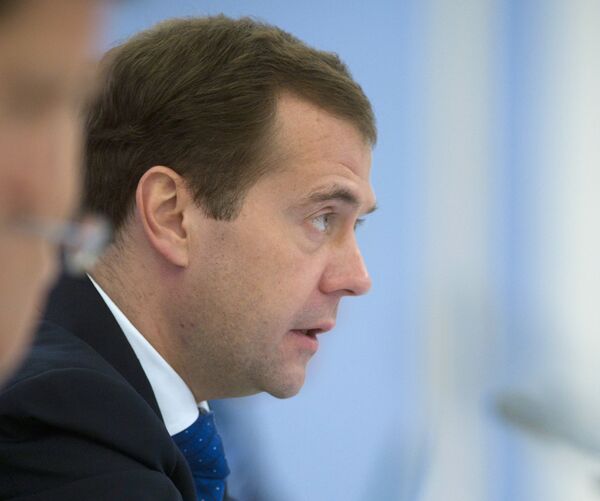 © RIA Novosti . Vladimir Rodionov
/
Go to the photo bank
Subscribe
Russia's foreign policy arena is starting to look like a battlefield of its own as the country's top officials give seemingly conflicting signals about where Moscow stands amid the upheaval sweeping the Arab world, experts say.

Russia's foreign policy arena is starting to look like a battlefield of its own as the country's top officials give seemingly conflicting signals about where Moscow stands amid the upheaval sweeping the Arab world, experts say.

As unrest in the region continues to produce stunning political shifts, Russian leaders have been working to forge responses that are both relevant to peoples in the Middle East and also serve Moscow's larger strategic goals in the region.

But in the process, apparent policy divergences, usually kept under wraps by the Kremlin, seem to be seeping into public view, with some policymakers favoring closer diplomatic alignment with the West, and others pushing for Russia to ignore Western pressure and be assertive in protecting its own interests.

This week alone, Mikhail Margelov, the Russian President's Special Representative for Africa, just back from jaunt in Libya, described Libyan opposition leaders as "serious and responsible people" who harbor no extremist ideas and support the idea of Russian mediation in Libya.

He reinforced such views on Friday, saying that that Libyan leader Muammar Gaddafi "has lost a moral right to stay in power" after shooting and bombarding his own people.

This appears to contradict the views held by top officials in the country's foreign policy department.

Last week, Russian Foreign Minister Sergei Lavrov said several times that a March 17 UN Security Council Resolution that imposes a no-fly zone over Libya does not provide a mandate for ground operations or a regime change in Libya.

He warned that the NATO operation in Libya was "sliding toward" a land campaign, a prospect he said Moscow viewed as "deplorable."

"We know that France and Britain intend to use military helicopters. We have given our view of NATO's actions," Lavrov said. "We consider that what is going on is either consciously or unconsciously sliding towards a land operation. That would be deplorable."

In a surprise move last month, Russian President Dmitry Medvedev joined Western powers in urging Libyan leader Muammar Gaddafi to give up power at the Group of Eight (G8) summit in the northern French seaside town of Deauville.

A month earlier, in a rare rebuke, Medvedev criticized a biting comment by Russian Prime Minister Vladimir Putin that the UN resolution resembled "medieval calls for crusades." The president warned that such remarks were "unacceptable" and could lead to a "clash of civilizations."

The duality of approach, like the double-headed eagle emblazoned on the country's coat of arms, has prompted political analysts to regard recent public utterances as symptomatic of a wider division in the Russia tandem.

"There are signs that there are two separate decision-making centers in the country - one in the Kremlin and the other in the White House," Tatiana Stonavaya, a political analyst at Russian Center for Political Technologies, said in a telephone interview from Paris. "The change is reflected in all areas - from foreign and domestic policy to economic and personnel matters. The reason this is more noticeable in foreign policy is that the Russian president has more leverage over foreign policy than he does over domestic policy."

Stonavaya says the split originated as a disagreement over tactical issues, but later President Medvedev appeared to become more and more irritated with the system of control and management that he inherited from his predecessor.

"There is no doubt that there is an on-going competition between the two leaders as well as between their teams," Stonavaya said. "What is still in doubt is how this will play out going into 2012."

However, other political observers saw the latest divergence of opinions as little more than political theater, designed to distract the Russian electorate ahead of December's parliamentary elections.

"There is neither a difference of opinion between Medvedev and Putin nor any disagreements between Lavrov and Margelov," Sergei Markov, a United Russia lawmaker and political pundit, said. "What we are observing is a tactical maneuver between the political challenges facing the Kremlin and the need to pacify Russian public opinion."

Markov believes that the Kremlin has, for tactical reasons, pitched its camp with Western leaders who are clamoring for democratic changes in Africa and the Middle East.

However, he said that Russian public opinion is much more hostile toward pro-Western leanings in the Kremlin. He said Prime Minister Putin, as a former KGB officer, knows the workings of foreign political institutions and is, like the Russian public, suspicious of their motives.

"Whether we are talking about the bombing of Libya, Yugoslavia or Iraq, Russia's public opinion is highly suspicious of Western motives," Markov said. "As the head of the United Russia party which is facing elections in December, Vladimir Putin is much more sensitive to public opinion and has been eager to be protective of Russian interests."

Whatever the differences in opinions, both leaders have publicly stated that foreign policy remains the exclusive preserve of the Russian president.

"We should not lose sight of the fact that [Deputy Prime Minister] Sergei Ivanov, Lavrov and the Interior Minister [Rashid Nurgaliyev] are members of what we call the 'presidential ministerial block,'" Markov said.

Political observers have also suggested that Putin and Medvedev have privately agreed on more issues than they cared to reflect in their public utterances. After all, the idea of a tandem is to maintain a public decorum indicating the constitutional delineation of power.

"Openly, Putin tries to underscore the fact that foreign policy is the responsibility of the president. That explains why he said that he was just expressing a personal opinion when he made his now famous remarks about the bombing of Libya," Markov said. "I think Putin wants to remain a popular leader, but he also wants Medvedev to look deeply in the eyes of public opinion."