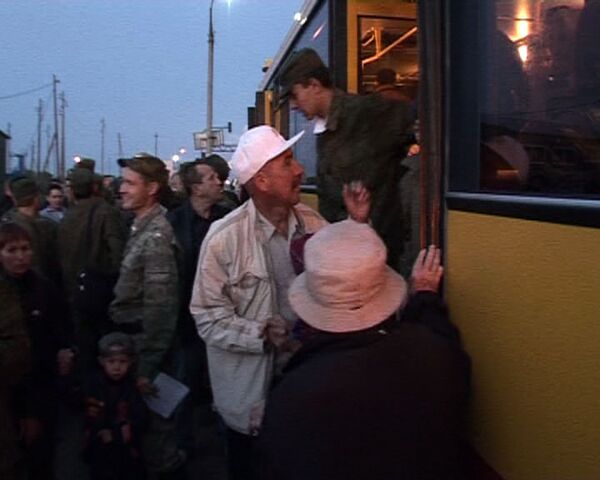 © RIA Novosti
Subscribe
International
India
Africa
The number of people injured in explosions and a fire at an artillery arsenal in Russia's Volga region Republic of Udmurtia has climbed to 57 with 25 hospitalized, the Emergency Situations Ministry said on Friday.

The number of people injured in explosions and a fire at an artillery arsenal in Russia's Volga region Republic of Udmurtia has climbed to 57 with 25 hospitalized, the Emergency Situations Ministry said on Friday.
"As of now, 57 people have sought medical assistance, 25 were hospitalized with two of them already discharged," a ministry spokesman said.
The fire has been brought under control, he added.
The Defense Ministry has reported one person as missing in the incident, but did not say whether the individual was a civilian or a military serviceman.
At around 11:10 p.m. local time [19:10 GMT] on Thursday shells began to explode in an artillery depot near the village of Pugachevo in Udmurtia. The facility belongs to the Defense Ministry's artillery directorate and is tasked mainly with munitions disposal.

Evacuation
Seven aircraft arrived from Moscow to deal with the blaze and explosions, including two planes carrying special firefighting equipment, two firefighting planes and three helicopters.
Thirty firefighting units and three firefighting trains with a total of over 900 personnel were involved in the effort.
More than 28,000 people were initially evacuated from nearby residential areas, but 9,000 had returned to their homes by mid-afternoon.

Eyewitness remarks
Eyewitnesses said fragments of the detonated shells were spotted up to two kilometers (1.6 miles) from the blast site.
Irina, a resident of the nearby town of Agryza, said the evacuation was well organized and began at around midnight with buses taking people away.
"These sounds [of explosions] woke us up and we did not understand anything... it was very scary. No one had time to grab their documents, money or valuables," Irina said adding that she, her son, a daughter-in-law and two grandchildren fled the town by car.
The blast-hit facility stores from 5,000 to 10,000 railway carriages with various ammunition.
The accident forced the Emergencies Ministry to temporarily close the Yelabuga-Izhevsk zone of the M7 federal highway, connecting Moscow and Ufa, the capital of the Urals republic of Bashkortostan. The nearby railway was also closed.
The incident is the second major accident involving munitions explosions at a Russian army base in a week. Last Thursday, a military arsenal in the republic of Bashkortostan, which borders Udmurtia, was rocked by a series of explosions as artillery ammunition exploded, causing the evacuation of nearby residents. No-one died in that incident but a number of houses were destroyed leaving 160 people homeless.