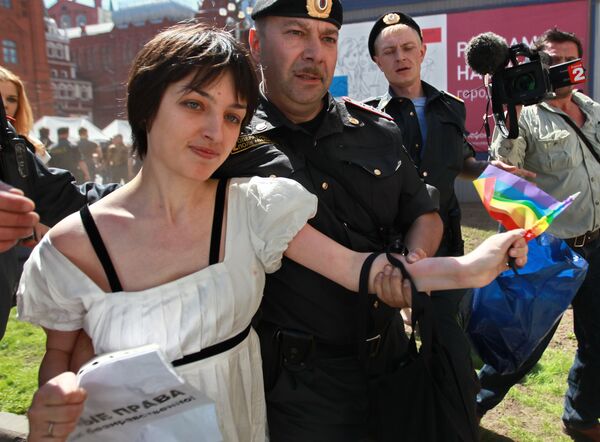 © RIA Novosti . Andrey Stenin
/
Go to the mediabank
Subscribe
International
India
Africa
Police in Moscow have launched criminal proceedings after a reporter was attacked during a banned gay rights demonstration on Saturday.

Police in Moscow have launched criminal proceedings after a reporter was attacked during a banned gay rights demonstration on Saturday.

Yelena Kostyuchenko, who works for the opposition Novaya Gazeta newspaper, was punched by an unknown attacker as riot police moved in to break up the protest in downtown Moscow.

"No one has yet been detained in the case," police told RIA Novosti.

If the assailant is found, he could face charges that carry a prison term of up to two years.

Kostyuchenko said the attacker had already been detained.

“I didn’t see him because he attacked me from behind. I felt a slap on the left cheek and then fell and couldn’t hear anything for 30 seconds,” she said.
Kostyuchenko said police qualified the attack as hooliganism while she plans to seek different wording.
“It was a hatred attack because I am a lesbian,” she said. “The person who hit me must stand trial as a homophobe.”

About 40 activists were detained for taking part in the event near the Kremlin walls and a separate rally in front of Moscow's city government building.

The New York-based Committee to Protect Journalists said in its new report on Wednesday that the situation for journalists has improved in Russia.

Despite a ruling last year by the European Court of Human Rights that the Russian government's bans on previous Gay Pride events violated the country's constitution, authorities barred the Moscow Pride for the sixth year running.