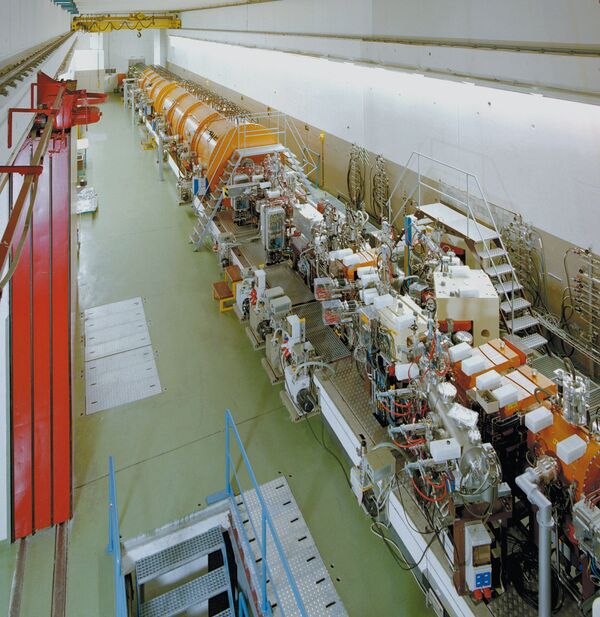 The GSI Helmholtz Centre for Heavy Ion Research in Darmstadt started a project to synthesize element 120, also known under its temporary name unbinilium, in early April. So far, the project yielded no significant results.

"We will stop the experiment tomorrow morning," Hofmann said.

Uranium, which has 92 protons in the nucleus, is the heaviest element that can be found in nature. Heavier elements, such as plutonium (94) can appear in nuclear reactor cores, and elements heavier than 100 (Fermium) can be synthesized only by bombarding a target with nuclei in an ion accelerator.

The GSI team tried to synthesize element 120 in 2007-2008 using uranium-238 and nickel-64, but the 116-day experiment ended in failure. Russian scientists also made a similar attempt in 2007 by bombarding a plutonium-244 target with iron-58 ions, but also failed.

This time, scientists in Darmstadt impinged projectiles of chromium-54 upon a target of curium-248 in the UNILAC heavy ion accelerator.

Element 120, if synthesized, will be hard to detect, as it has an expected half life of 10-30 microseconds.

"We haven't yet finished processing the data, however, it looks like we failed to obtain element-120 during the first part of the experiment," the project's chief scientist said.

It is unclear when the project will resume, but "there is a chance it will happen in August or September," Hoffmann added.

In various periods, GSI teams have also synthesized Meitnerium (1982), Hassium (1984), Darmstadtium (1994), Roentgenium (1994) and Bohrium (1996). Their discovery of the element 112, named Copernicium, was officially recognized only in 2009, following an independent experiment.

The heaviest element synthesized to date, element 118, was obtained in Russia's Dubna nuclear research facility in 2002.