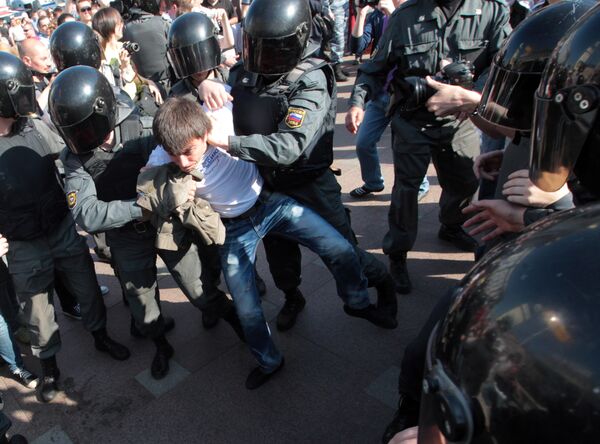 Police detained on Tuesday several dozen opposition activists during unauthorized rallies in Moscow and St. Petersburg in support of freedom of assembly.

Eduard Limonov, the leader of the Other Russia radical movement, told RIA Novosti by phone that he had also been detained during the protest.

Russian opposition and human rights activists rally on the last day of every month with 31 days in honor of Article 31 of the Russian Constitution, which guarantees freedom of assembly.

Some 100 opposition activists took part on the rally on Triumfalnaya Square, the spokeswoman said, adding that the protest was covered by about 100 journalists.

In St. Petersburg, besides some 40 opposition protesters, police also detained several anti-opposition activists who were carrying placards claiming "The opposition is a clown and shame for St. Petersburg," a RIA Novosti correspondent reported.

Meetings of Strategy 31 had never been authorized before March 31, when such a rally was first sanctioned by the Moscow authorities. Many viewed this move as an attempt to clamp down on the movement by depriving it of its cause.