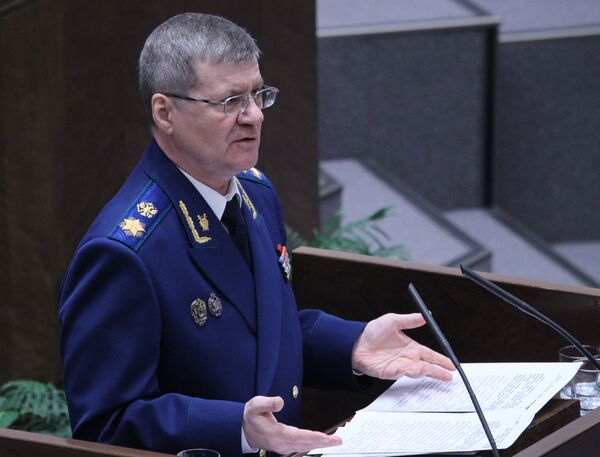 The Sergei Magnitsky Rule of Law Accountability Act of 2011, introduced in the U.S. Senate on May 20, freezes assets and blocks visas of individuals who commit gross human rights violations against Russian rights activists.

"Investigative bodies and the Russian justice [system] are coming under pressure. I believe that this is unacceptable," Chaika said.

Russian President Dmitry Medvedev has directed the Prosecutor General's Office to closely watch the course of the investigation, Chaika said.

Top-notch professionals, "the creme de la creme of Russia's prosecutorial establishment" will work on the case, he said.

Lawyer Magnitsky died aged 37 in a Moscow pre-trial detention facility in 2009 after being refused medical treatment for pancreatitis. He had been detained as part of an investigation into embezzlement involving the Hermitage Capital investment company, for whom he was working.

Magnitsky claimed he had been falsely imprisoned by the same officials in the Interior Ministry that he had accused of embezzlement.

The Prosecutor General's Office announced on Monday that Oleg Silchenko, an investigator in the Magnitsky case, had not violated any federal laws in "pressing criminal charges and arresting" the suspect, as well as extending his custody pending trial.

The Sergei Magnitsky Rule of Law Accountability Act of 2011 targets those involved in Magnitsky's case and also targets individuals "responsible for extrajudicial killings, torture, or other gross violations of human rights."

The bill also seeks to protect individuals who expose illegal activity by Russian government officials as well as extend protection to those who advocate for freedom of expression, religion or other democratic principles.