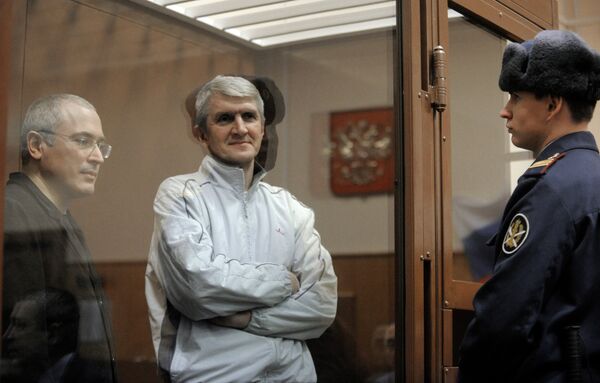 The European Court of Human Rights ruled on Tuesday that the first trial of jailed Russian oil tycoon Mikhail Khodorkovsky was not politically motivated.

The European Court of Human Rights ruled on Tuesday that the first trial of jailed Russian oil tycoon Mikhail Khodorkovsky was not politically motivated.

The former Yukos owner and his business partner, Platon Lebedev, were jailed in 2003 on embezzlement and tax evasion charges.

Khodorkovsky, once Russia's richest man, claims the charges against him are revenge for his funding of opposition parties during the presidency of Vladimir Putin.

But the court said in a press release that there was "no violation of Article 18 (limitation of rights for improper purposes) as regards the claim that his prosecution was politically motivated."

"Claims of political motivation behind prosecution required incontestable proof, which had not been presented," the judgment said.

Putin has consistently denied any political motivation behind the conviction, saying last year that "a thief belongs in jail."

The Strasbourg court ruled however that had been several violations and procedural flaws during Khodorkovsky's detention in a remand prison between 25 October 2003 and 8 August 2005 and ordered Russia to pay the former tycoon 10,000 euros ($14,380) in damages, and 14,543 euros in costs and expenses.

Khodorkovsky's lawyer Karina Moskalenko hailed the decision, saying it showed that her client was "treated unlawfully from the very start."

"It is an important step on the path of defending his rights," she said in a statement on the website of the former tycoon's supporters, khodorkovsky.ru.

Russia's Supreme Court said it would not be able to comment until it received the full text of the ruling.

"The Strasbourg Court delivered an objective verdict based on judicial procedures and facts despite the media campaign in the Western and pro-Western media about Khodorkovsky being a prisoner of conscience," he said.

Khodorkovsky and Lebedev, who had their jail terms extended in a widely condemned trial in December, filed for their early release on Friday, but observers say the bid is unlikely to be successful.

The two men were near the end of an eight-year term for tax evasion when they were told they would have to stay in jail until 2017.

Last week, a Moscow court upheld the two men's second conviction, but cut their sentences by a year. Amnesty International subsequently recognized Khodorkovsky and Lebedev as prisoners of conscience.

When asked in a news conference on May 18 whether Khodorkovsky would be a danger to society if released, President Dmitry Medvedev said: "No danger whatsoever."