Russia delivers another batch of naval fighters to India 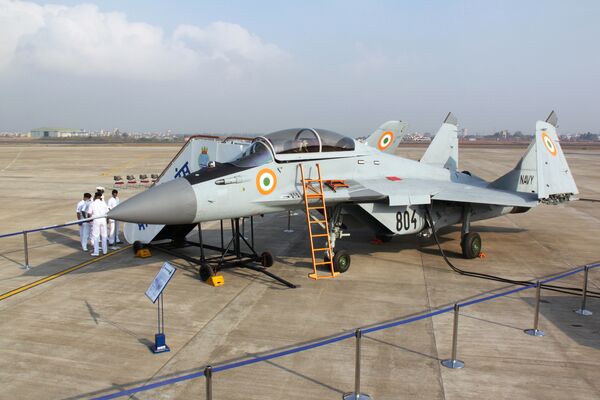 Russia's MiG aircraft maker delivered a new batch of five MiG-29K/KUB carrier-based fighters to the Indian navy in May, the company said.

Russia's MiG aircraft maker delivered a new batch of five MiG-29K/KUB carrier-based fighters to the Indian navy in May, the company said.

"A flight training simulator and other technical equipment has also been delivered," MiG said in a statement on Monday.

The two countries signed a contract stipulating the supply of 12 single-seat MiG-29Ks and four two-seat MiG-29KUBs to India in January 2004. The contract is part of a $1.5-billion deal to deliver the Admiral Gorshkov aircraft carrier, currently being retrofitted in Russia for the Indian Navy.

In March 2010, Russia and India signed a $1.5-billion contract on the supplies of 29 additional MiG-29K Fulcrum-D carrier-based fighter jets to New Delhi. The start of the supplies is scheduled for 2012.

The contracts for the jets also stipulate pilot training and aircraft maintenance, including the delivery of flight simulators and interactive ground and sea-based training systems.

The Indian Navy has named its MiG-29K squadron the "Black Panthers." The fighters will be based at an airfield in the state of Goa on India's west coast until the Admiral Gorshkov joins the Navy under the name of INS Vikramaditya in early 2013.

The Vikramaditya is expected to carry up to 24 MiG-29K/KUB fighters. The future indigenous aircraft carrier Vikrant being built by India may also carry these aircraft.