Dispersal of protest rally will not affect Georgia's image - minister 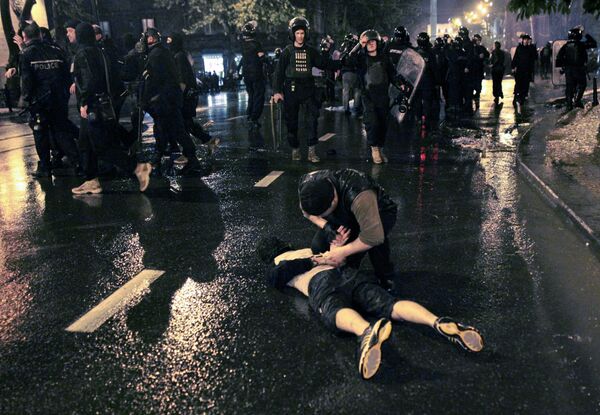 The dispersal of an opposition demonstration in Georgia by the country's security forces will not tarnish Georgia's image, Deputy Foreign Minister Nino Kalanadze said on Monday.

The dispersal of an opposition demonstration in Georgia by the country's security forces will not tarnish Georgia's image, Deputy Foreign Minister Nino Kalanadze said on Monday.

"Various international organizations gave different evaluations to those events," Kalanadze told journalists in Tbilisi, but "no one was doubtful about the legitimacy of the demonstration's dispersal."

"Therefore, I don't think this may negatively affect the country's image," she said.

Riot police used water cannons, rubber bullets and teargas to disperse opposition activists who gathered last week on Tbilisi's main street in an attempt to prevent an Independence Day military parade. They also sought to block the rostrum from which President Mikheil Saakashvili was to deliver a speech.

The rally, organized by the opposition People's Assembly movement, was sanctioned by the Tbilisi authorities to take place between May 21 and May 25, but the protesters refused to leave the streets after the deadline. The unrest left two people dead, including one policeman.

Several international organizations, including Amnesty International, criticized Georgia for using force against protesters and called for a thorough investigation into incidents involving violence.

"While some of the protesters were armed with makeshift shields and flagpoles and clearly intending to resist attempts to disperse them, the police have no excuse for beating those offering no resistance," said John Dalhuisen, Amnesty International's Director for Europe and Central Asia.

Russia has also accused Georgia of violating the right to public assembly by using force against demonstrators.

Kalanadze agreed that an investigation should be launched to establish if reports about violations by both protesters and police during the May 26 events were true.

Saakashvili has blamed the protests on outside forces, and Georgian Foreign Minister Grigol Vashadze has pointed directly to Moscow as the orchestrator of the unrest.

Russia and Georgia are at loggerheads on many points, in particular over Moscow's recognition of the independence of the former Georgian republics of Abkhazia and South Ossetia.